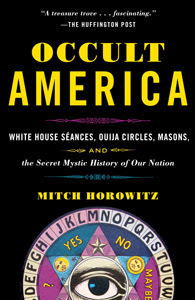 Occult America, The Secret History of How Mysticism Shaped Our Nation by Mitch Horowitz (Bantam, $16) Mitch Horowitz is an editor and author of occult and esoteric topics and here he places out a fine history of their influences in America's history. Starting with the German philosopher Johannes Kelpius' pilgrims arrival in Philadelphia in 1694 and the "Burned-over District" of upstate New York he shows how these early thinkers promoted social progress and individual betterment.Albany and the Hudson Valley became known as The Burned-over District because it was once home to so many prophets and ideologies that burned bright and launched religions across the country. Mother Ann Lee's Shakers settled here and Joesph Smith found his Seeing Stones here. Millerites, or Seventh-day Adventists, the Universal Publick Friend, Masons, Mesmerism, and Transcendentalism all had homes here. Horowitz moves his history through Spiritualism, Seances, Madame Blavatsky's secrets of the Eastern Masters; how these secret or hidden histories influenced the beginnings of the New Age Movement and also William Dudley Pelley's Silver Shirts and White Supremacy movement. Hoodoo influenced Frederick Douglas, Professor Black Herman, and Marcus Garvey, Ghandi credited Theosophy for his principle of equality of universal brotherhood of man and his non-violent ethics that would later touch Martin Luther King, Jr. Astrology, The Age of Aquarius, and Creative Visualization were the beginnings of Prosperity Philosophies from Dale Carnegie and Napoleon Hill most recently seen in the popularity of "The Secret". I haven't even managed to mention Rosicrucians, Ouija, Edgar Cayce, Tarot, Wicca or Voodoo. Trust me, it's all covered in this engaging volume. This is a great book for anyone interested in the spiritual evolution of our country. In this day when politicians are compelled to tell us of their personal mission from God, it's good to remember this has always been a nation with a wide spectrum of religious experience. Occult America is available at Jackson Street Books , as well as fine independent bookstores everywhere. ps: sorry about the formatting, Blogger hates me today. Really, I did put spaces between the paragraphs.
Posted by Tammy at 1:30 PM

What is So Very Different About Your valentina Psychic Love Reading?

As a Professional Tarot Reader and Psychic Empath - I am able to assist you, right now, regarding the crucial happiness of your true heart. And the first words I wish to say to you are: