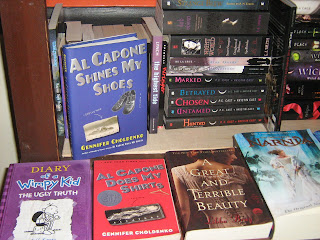 I have some wonderful YA novels to talk about today. If you have a pre-teen or teen interested in history, these volumes feature great characters and fascinating stories.

Al Capone Shines My Shoes by Gennifer Choldenko ($17.99, Dial Books) Moose and his family live on Alcatraz Island, where his father is a guard. There are other families on the island, almost enough for pick-up baseball games, if the girls agree to play. The kids are not supposed to talk with the inmates, but it's too tempting to them to not try to sneak a peek of Al Capone or one of the other famous gangsters who are locked up and assigned tasks to keep the island running. When Moose's autistic sister get dropped from a special school in San Francisco, he sends a note in the pocket of his dirty shirt, asking Capone's help. When a return note comes back saying "Done." he realizes this favor could get his dad fired from the job they very much rely on. Then, a note arrives asking for a favor from Moose and he must figure out how to get yellow roses for Capone's girlfriend, May without the Warden finding out that Moose has been in touch with the convict. Set in a time when autism wasn't well known or spoken of, many people on the island urge the family to send the sister to an institution rather than keep her in the family. Moose has to negotiate the usual rivalries between his friends and the precarious hold his father has on his job.

Al Capone Shines My Shoes is the sequel to the Newberry Honor book Al Capone Does My Shirts ($6.99, Puffin Books), which is in paperback now. These books give a great history lesson in the lives of the people who called Alcatraz home. 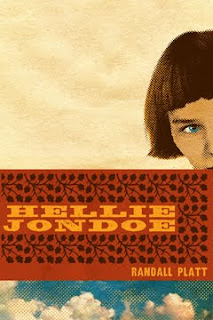 Hellie Jondoe by Randall Platt ($16.95, Texas Tech University Press) Hellie (Helena Smith) is an orphan "street Arab" in New York City where she and her brother Harry pick pockets and find food in garbage cans to survive. Harry has signed Hellie to the Orphan Train, taking children to the West to find families. Hellie does not want to leave Harry, but it's getting more difficult to hide her female status from the gang they've pitched in with. When a gunfight leaves Harry apparently dead from a bullet wound, Hellie reluctantly embarks on the train. It's on this train trip she meets A.B.E. Collier, a woman (!) photographer, herself a former Orphan Train child who is documenting the journey to sell to Mr. Hearst. Hellie, half-blind Lizzie, and an infant with a club foot are finally adopted by the domineering Mrs. Gorence, to work on the Hidden Hills Ranch in far away Oregon. Assigned to live in the wash house, and not the home, they come to realize their true fate, they had been sold to the Orphan Train and indentured for 3 years. Harry has actually left the hospital with a new trade, selling the Morphine he was introduced to and now has enough money to try and rescue Hellie. His encounter with A.B.E. Collier exposes him to the Spanish Flu that is sweeping the country and he unwittingly carries it to Pendleton and the Hidden Hills. Nursing her brother, herself and the farm cook back to health, Hellie learns some truths about her birth family and her newly formed family.
Platt has used period slang to great effect here and provides a Glossary at the end.

These books are available at Jackson Street Books and other fine Independent bookstores.

As always, books ordered here will have a freebie publishers Advance Reading Copy included as a thank you to our blogosphere friends.
Posted by Tammy at 9:53 AM 1 comment: