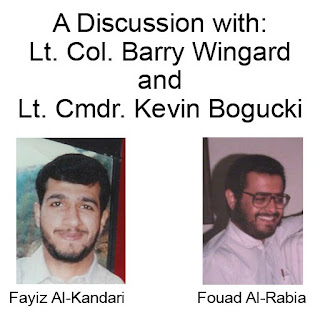 I first heard the story of GITMO detainee, Fayiz Al Kandari from GottaLaff of thepoliticalcarnival.com. She had been in contact with his military attorney, Lt. Col. Barry Wingard. In her first post, she told how he had despaired of getting any traction with the American press.
Lt. Col. Wingard is a Judge Advocate General (JAG) in the Air Force representing Fayiz al-Kandari. He began his career in the Army as an enlisted infantryman and then an infantry officer, has served 26 years and is a veteran of both Bosnia and Iraq conflicts.

He comes from a well to do family in Kuwait. He has studied law in the United Arab Emirates, and was on a charity mission to Afganistan when he was grabbed by bounty hunters and sold to the American authorities.

While in U.S. custody in Kabul in December 2001, Al-Kandari was shackled in various stress positions for as long as 36 hours at a time. He was beaten with a chain and water hose. Photographs documenting his condition have not been released.
In early 2002, Al-Kandari was transferred to Bagram and held in a roofed tent with no sides where overnight temperatures typically reached below freezing. Photographs again documented his condition, but they have never been released. […] He was transferred to Kandahar in early 2002, … [where] his entire body was shaved (except for a cross on his chest, which was later shaved off) and he was initially kept awake in solitary confinement for five straight days. The abuse continued and resulted in broken ribs and severe bruising documented by medical exams performed months later.
Before being placed on the plane out of Kandahar, his sound-proof headgear was lifted and a female voice whispered, “You are going to hell in GTMO.” At the time, he was also drugged, sandbagged, and placed into a head harness for the 24 hour trip. At Guantanamo, he was again shackled into stress positions for extended periods of time. He was also urinated on and subjected to sleep deprivation, strobe lights, ear piercing music, cell extractions, and extreme heat and cold conditions in his cell via temperature controls. All told, Al-Kandari has been interrogated approximately 400 times and abused throughout the time he was in U.S. custody.
A Department of Defense legal review of Al-Kandari’s case found the evidence against him “is made up almost entirely of hearsay evidence recorded by unidentified individuals with no first hand knowledge of the events they describe.”
In short, the U.S. learned nothing of value from its abusive treatment of Al-Kandari and in all likelihood exculpatory materials confirming Al-Kandari’s whereabouts and accounts of abuse will be classified and withheld from public view.

-the Political Carnival.com
That quote is a bit out of date. It has now been Eight Years.

And, despite the recent admission by former Colin Powell aide, Lawrence Wilkerson that George W. Bush 'knew Guantánamo prisoners were innocent', it seems the Obama administration is not going to act quickly to release these detainees.

Lt. Cmdr. Kevin Bogucki was the defense council for

Fouad Mahmoud Hasan Al Rabiah, a fifty-year-old father of four children. Prior to his detention by U.S. forces in 2001, Mr. Al Rabiah was gainfully employed by Kuwait Airways, where he was responsible for managing aircraft parts. He is an international graduate of Embry-Riddle Aeronautical University but is neither a licensed pilot nor trained in aircraft operation.


As a peaceful and devout Muslim, Mr. Al Rabiah has an established history of international relief work. For example, in 1988, he worked on a Red Crescent rescue campaign in Kosovo. Similarly, in 2000, he delivered a consignment of medicine to Bangladesh for patients suffering from kidney disease.

In 2001, Mr. Al Rabiah made two trips to Afghanistan to observe and document the refugee crisis and to provide whatever immediate relief he could. During his second visit, the United States invaded Afghanistan and Mr. Al Rabiah was sold by Afghan villagers to the Northern Alliance

And, now here is why I have told you all this:

Lt. Col. Barry Wingard and Lt. Cmdr. Kevin Bogucki, the U.S. military attorneys for Kuwaiti Guantanamo Bay detainee Fayiz Al Kandari, will hold a virtual town hall meeting at Virtually Speaking Studios at 6:00 PM PST on Monday, April 26, 2010. The attorneys will share Fayiz’s story, discuss legal developments in his case, provide their views on the Obama administration’s detention policies and take questions from the audience, consisting of citizens from across the country.

You can be part of this audience. You could sign up for an account and create your own Second Life avatar, or you can tune into the Virtually Speaking BlogTalkRadio show and call in with your question. I am honored that these gentlemen will come talk to us and report the latest news from Guantanamo, where they have spent the past week.

I would also like to thank Jay Ackroyd & the Virtually Speaking crew for his generous offer of hosting our discussion, and their help in getting it all arranged.

I'll close by asking you to read Jane Mayer's The Dark Side as Gottalaff recommends.

As always, a book ordered here will have an extra freebie: a publisher's Advance Reading Copy of something cool included.
Posted by Tammy at 5:10 PM 3 comments: