Update! New pictures from the Party. 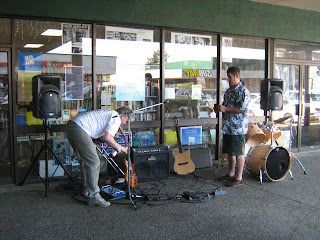 The band sets up. 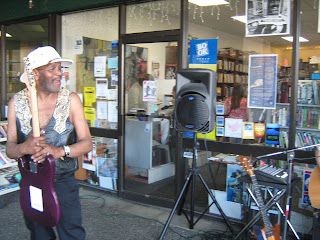 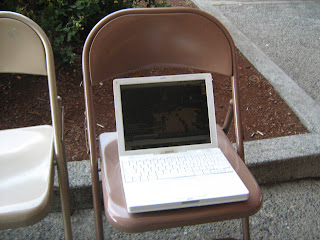 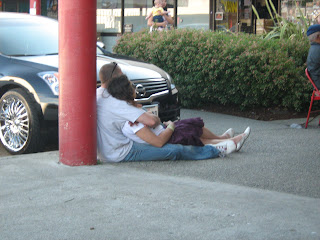 Neighbors catch the (for them) impromptu concert. 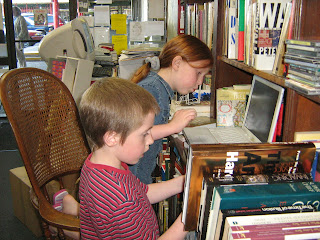 Ahnika hangs out in Second Life 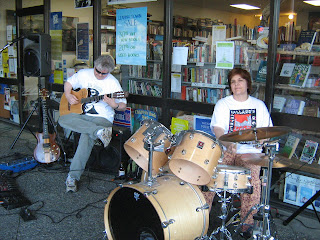 Brenda takes over for Phil. 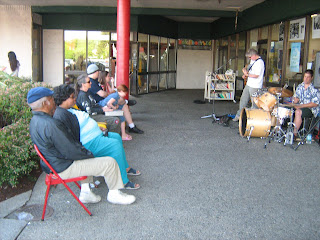 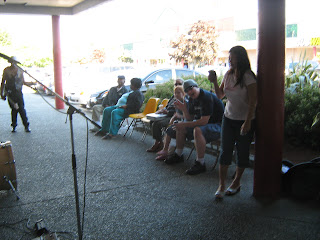 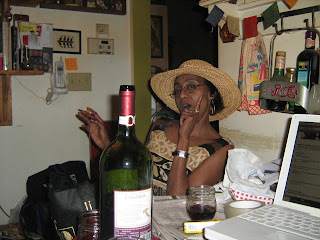 Berta at the red table at the end of the day.
Posted by Tammy at 11:28 PM No comments: 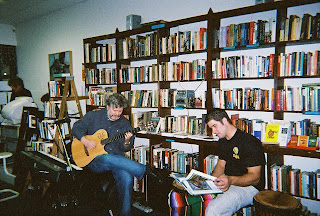 Closing Party!
And what better reason to have a party than to say goodbye to our friends, neighbors, customers and colleagues.

Mark Saturday May 24th on your calendar to come say goodbye with fine refreshments and the sound stylings of Tim Scallon and the Beneficiaries, beginning at about three p.m. Please join us.

The Sale Continues!
All new books (except special orders) are 30% off cover price. All used books (except collectibles) are 20% off! The less we have to move, so much the better.

What’s Up Next?
If the real estate gods are with us, the sale of our house will close on May 28th; the purchase of our new Hoquiam home will close the next day. Then begins the move. Our last official day will be May 31st. However, throughout June, we will be at the store packing boxes and we will be available if you want to buy some books. What those days are, well, we’re not quite sure. When we have a better sense of our schedule, we will post it on the store door and on the phone answering machine.
We’ve already have some volunteers to help us pack. If you would like to help, please let us know. If nothing else, we will feed you.
And if you’d like us to stay in touch, please reply by email or calling us at 206.324.7000.
Soon we should have a new and improved website with a shopping cart at www.jacksonst-books.com. And our musings about books, politics, the arts and other announcements can be found at our blog http://jacksonstreetbooks.blogspot.com.


Thanks for everything! Remember to support your independent retailers!
Posted by Tammy at 10:14 PM 1 comment: 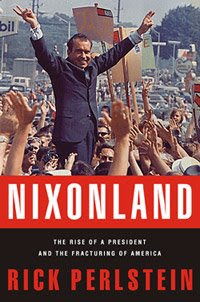 Rick Perlstein’s Nixonland (Scribner Book Company $37.50) is far and away the most absorbing and fascinating history I have read in a long while. Of course, I came of age during the period he describes so well, and it resonates for me. At times, while reading, I’m embarrassed by the exuberance of my youth; at other times I remember the passion of my youth fondly. But even if you missed the sixties, you will also be transfixed by this narrative.

Beginning with the apotheosis of Lyndon Johnson and his social agenda in 1964, and the debacle of the Goldwater candidacy, Perlstein moves onto the social forces that ultimately brought down his presidency. At center stage is Richard Nixon, carefully repairing his reputation after the 1960 presidential race and his loss to Pat Brown for Governor of California in 1962, and exploiting every fissure that surfaced in American society to his advantage.

The social movements are there: the growing Anti-war movement and the Civil Rights movement that morphed into a different kind of thing after the Civil Rights Act of ’64 and the Voting Rights Act of ’65, both ultimately coalescing in Martin Luther King, hated and vilified by many, loved and sainted by others. Both merge in the 1968 Democratic National Convention, and the police riot that ensued.

And ironies are noted. Humphrey’s staunchest supporters are the southern delegates; many were the same ones who walked out on his brave Civil Rights speech in 1948 and began the Dixiecrat party with Strom Thurmond at its head. That would be the same Strom Thurmond who made secret deals with Nixon before the GOP convention in 1968, ensuring a Nixon candidacy.

Perlstein’s contention is that the United States was about as close at this time to civil war as it had been since the 1860’s. He reminds us why. It was a time that the conservative Chicago Tribune could editorialize on the day of Martin Luther King’s funeral that “ The murder of Dr, King was a crime and the sin of an individual…The man who committed the act must come to terms with him maker..(The) rest of us (are) not contributory to this particular crime”. It was this kind of fine analysis that could drive any red-blooded human being to rebellion.

This book is 748 pages long in text, with an additional 100+ in notes and index. I am about half way through and will follow up this report with another next week. In the meantime, go get a copy and read this work. It’s worth the money.


Rick Perstein will be interviewed by Jimbo Hoyer at Virtually Speaking in Second Life 6 pm PST/SLT, May 29th.
Posted by SeattleDan at 10:53 PM 2 comments: