Department of Book Reports:The Man in The Moon

Children's Literature, I have to admit, is not my strong suit when it comes to bookselling. Oh, I'm acquainted with much of it, for sure. I read voraciously when I was child myself, and when our son came along, I rediscovered much of it. Not that I'm disparaging of KiddieLit; there are some fine authors and great stories out there, that go on beyond Zebra, and make it fun to have fun, though you have to know how. (Also some of the best book people I know are devoted to children's books). But since my maturity (or some would say my lack therof), I've tended to read books meant for adults. 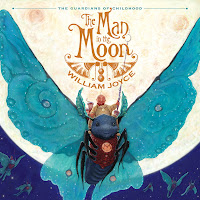 But several years ago, I stumbled across the work of William Joyce. Specifically, I read his book Santa Calls and was enthralled by both his art and his story. Naturally, being the fine father I am, and with my son at an appropriate age, I brought Santa Calls home and read it to him many times. So when William Joyce produces a new book, I will read it, even if my son is no longer at a convenient age to be read to.

So I was excited when in the last month a new book by William Joyce was published. It is called The Man in the Moon (Atheneum $17.99) and it does not disappoint. It is a boldy illustrated tale, the first in a projected series Joyce is writing entitled The Guardians of Childhood. The book (and the other titles to come) explain the origins of some of our best loved symbols of childhood, like the Tooth Fairy, Santa Claus and the Easter Bunny. The Man in the Moon, then, tells the tale of how the Man in the Moon got there, his parentage, his friend, Nightlight and nemesis, Pitch, who is aided by his henchmen, the Nightmare Men.

Joyce has a wonderful sense of what appeals to the young mind and it is no wonder that he has worked with Disney Studios and Pixar on many of their pictures, including Toy Story, as well as the PBS series George Shrinks. Even if you have no taste for children's stories, his illustrations are breath-taking and it is worth having this book and others by him just for the sheer beauty of them. And if you do have a young child in your life, I highly recommend you check out The Man in the Moon. That child will love it.

The Man in the Moon is available at Jackson Street Books and other fine independent bookstores throughout the land, and, perhaps, even on the moon itself. What are some of your favorite books of childhood?

Posted by SeattleDan at 8:09 AM No comments: