Department of Book Reports: Summer for the Gods 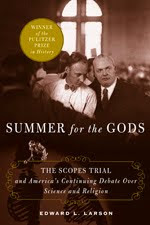 About a year ago, I did a book report on the Lawrence/Lee play, Inherit the Wind, a drama loosely based on the Scopes trial of 1925 that featured the battle between William Jennings Bryan and Clarence Darrow, an opening salvo on what we now call the Culture Wars. So recently, and belatedly, I picked up a copy of the history of that time, Summer for the Gods: The Scopes Trial and America's Continuing Debate over Science and Religion by Edward J. Larson (Basic Books $16.95).

The book itself is an amazing social history, and winner of the Pulitzer Prize in History in 1998. Of course, Larson discusses the backgrounds of the participants in the trial. Bryan, "The Great Commoner", is all too easily dismissed these days as a fundamentalist crank, but he of course headed the Democratic Party ticket for President in 1896, 1900 and 1908, and for all the bluster of his orations in Dayton, Tennessee in 1925, he was a great force for progressive political ideas throughout the early part of the 1900's, opposing the banks, supporting working peoples causes and vehemently anti-imperialist. He served as Woodrow Wilson's Secretary of State, until 1915. In fact, Clarence Darrow, liberal lawyer, supported the candidacies of Bryan during those times. And there was John Scopes, erstwhile school teacher, mild-mannered, socialist, who volunteered to test the state law banning the teaching of evolution in public schools.

The case itself was set up to be that: a test case. Many towns in Tennessee wanted to "host" such a trial. The ACLU wanted to test the law and advertised for a teacher who would break the law. In the town of Dayton, a group met at the local drugstore with both sides desiring a hearing on the matter. Scopes, who actually only taught science in the High School occasionally, affably agreed to do so.

Summer for the Gods is much more than a summation of the ensuing trial. Larson discusses the background of both politics, those of the country as well as the state's internal issues. He reports on the science of the time, with illuminating background on the state of evolutionary biology in the 1920's. He also gives a history of textbook publishing, the ACLU as well the on-going academic struggle for Academic Freedom. And with the current attacks in our fair land on Labor Unions, Planned Parenthood and on women in general, this book resonates loudly. Originally published by the Harvard University Press, it is well written, well documented and important. I can't recommend it highly enough.

As always, books ordered here will have a freebie publishers Advance Reading Copy included as a thank you to our blogosphere friends.
Posted by SeattleDan at 8:18 AM 2 comments: