Department of Book Reports: A Kidnapping in Milan 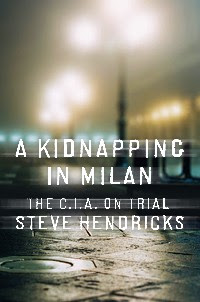 A Kidnapping in Milan, The C.I.A. on Trial (Norton $26.95) While this book reads like a thriller novel, Steve Hendricks shows how ineptness and perhaps plain laziness on the CIA's part made it relatively easy for the Italian authorities to prosecute and convict 23 agents in the extraordinary rendition of Abu Omar in 2003. Armando Spataro, an Amerophile who thought the US Constitution a most elegant document, led the prosecution. His dedication to justice is well served in this case.
Abu Omar was under Italian surveillance at the time of his abduction on his way to the Mosque on Viale Jenner, and the CIA operation surely damaged the case they were constructing against terrorists in Italy. Hendricks goes into great detail about the treatment of Omar, and along the way gives history lessons on the CIA (originally conceived in Italy to make sure that Democratic elections after WWII did indeed elect the most right wing candidates), the covert Rendition programs (begun in 1883, when Pinkertons captured a larcenist in Peru), and torture (both detailed accounts of Omar's treatment and historic practices) and the ways which both Bush and now sadly Obama continue the program.

The carelessness on the part of the CIA made it easy for Hendricks and his researcher to find many of the agents now returned to their American lives. Cell phones were registered to addresses near Quantico headquarters. Some were even re-cycled phones from operations earlier in the year. Agents stayed in posh hotels and had the Mileage points awarded to their personal credit cards. While there are instances of agents sharing a room, it looks doubtful that this was done with the *ahem* goal of saving the American taxpayer money.

Omar was held and tortured in prisons in Egypt. I kept thinking back to these parts of the book while watching events unfold these past 2 weeks in Egypt. The newly appointed Vice President Suleiman was the US' main connection to the torture prisons and should give us all reason to loudly object to our governments facile acceptance of him. I applaud the peaceful Lotus Revolution and dearly hope the people of Egypt can keep the American influences from interfering.

Steve writes eloquently at his website on his reasons for writing this book:

“The barbarisms of America’s ‘War on Terror’ appalled me, as did reporters who went along with the barbarisms,” Steve says. “I was particularly taken aback by the Bush (and now Obama) claims that torture-by-proxy makes us stronger. I wrote A Kidnapping in Milan because few reporters have shown what torture really looked like, because the Italian magistrate who was prosecuting the CIA kidnappers was a charismatic figure, and because I wanted to see if he would succeed in his struggle against American lawlessness. Also, before the CIA kidnapped Abu Omar, the Italians seemed to have had him under thorough and fruitful surveillance, and the snatch appeared to have badly damaged Italy’s work against terrorists. This case, in other words, looked like a good example of how the ‘War on Terror’ made the West less safe. I was also intrigued because the victim was probably a terrorist, not an utter innocent, which added a shade of gray to a story that might otherwise have been more black and white. I wanted to see if I could make a convincing case that torture was wrong no matter who its victim was.”

I wish I could make that last line even bolder.

Some of you may remember when we gave the General a copy of Steve's first book, Unquiet Grave for xmas. If you don't, I urge you to go back and read both the General & Steve's guest post.

As always, books ordered here will have a freebie publishers Advance Reading Copy included as a thank you to our blogosphere friends.
Posted by Tammy at 7:13 PM 4 comments: