My dear friend John Marshall reminded me of some basic truths of bookselling today.

Booksellers Write
From the Poetry Frontier by John Marshall

Along with my wife, Christine Deavel, I own and operate a poetry-only bookstore. Since there is currently just one other poetry bookstore in the U.S., I'm doing something few fellow booksellers do. But, like millions of others, I am also a retail clerk. Like car salesmen, we exchange goods for money.

Twenty years ago I sold my first book and felt guilty doing it. I'd been an English major, raised in a military family, so selling was unnatural to me. That feeling lasted quite awhile. Books can teach a great many things, but education in retail sales probably has to come through experience.

I remember one particular turning point. We had a customer who was a professional salesman. He had fallen head-over-heals in love with poetry and shared his enthusiasm, and checkbook, with us on a weekly basis. Quite a character, voluble and vibrant. One day I told him about a cassette tape-recording of the poet H.D. reading with a symphony. I hadn't ordered it because I thought it was too expensive. It was a rare recording and, since the company that offered it and several other gems has long since folded, now I wish I had bought a carton. The customer berated me for not ordering the tape. Said he would have bought two right then if I had them. He told me it is not my business to decide for him the value of an object.

He was oh so right. The store could have afforded a copy of the tape. It would have set us further apart from other stores. There I was, acting like the over-bearing parent of my customers. Not at all what I should have been doing. I was devastated, seeing myself in that glaringly accurate, unfavorable light. This good fellow died a few years ago. I happened on his obit in the paper. My wife and I went to his service. He is missed by us, but he is thanked, too.

I still find myself, though less and less often, wondering if the person I am taking money from can really afford the transaction. And I don't mean will the check bounce? I mean: does it make sense for them in their economic life?

Years ago, when we had a general bookstore, we had a very troubled fellow, who kept asking if this or that book was the "definitive" book on its subject. He was certainly mentally challenged, and looked to be living on the street or in a decrepit house. But he stacked books on the counter as he went along. And his litany of "is this the definitive book on . . . ." showed that he knew a lot about many things, and was making subtle and accurate connections between people and ideas. I don't remember how much the books came to, but it was well over a hundred dollars. He paid for a stack of books I was convinced I was going to be re-shelving with wadded up bills. It was like a dream; totally unanticipated and out of my control. At the time I wondered if I should refuse him, tell him to keep the money, buy some food and a shower. I'm not certain I did the right thing, but I believe I did. I took him seriously, trusted him to know what to do with this time and money, treated him as an equal. I suspect that was a rare encounter for him.

This sweet liberal has learned a sort of libertarian lesson. Retail is about trusting the customer to take care of him or her self. Happily, I'm not trying to sell something I don't believe in. My purpose is to make things available, and to have some knowledge about them. The customers and I are equals. If they want to buy books from me, I am more than happy to oblige. Anything else is a matter of imagination, and that doesn't belong in retail. That's for the arts.

John Marshall (aka J.W. Marshall) co-owns Open Books: A Poem Emporium in Seattle and is a soon-to-be published author. His book of poetry Meaning A Cloud will be published in March by Oberlin College Press. It won the eleventh annual Field Poetry Prize. He and Open Books co-owner Christine Deavel will join our regular cast of Footnotes columnists. Reach John at marshall52@gmail.com.


John and Christine run one of our favoritest bookstores, Open Books. I sold to them back in my rep days, and have valued them and their taste in books always. I didn't really sell to them, I just asked what they thought interesting at the moment. That always led to a spirited discussion! And, most times, I bought a book from them.

I'm pleased to see that a new volume of John's poetry will be available soon.
Posted by Tammy at 10:41 PM 1 comment: 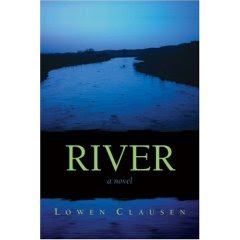 I was going to write a big ole book report about River, but I'm so happy I get to be the Booksense pick for Lowen twice!


RIVER, by Lowen Clausen (Silo Press, $14.95 paper, 9780972581127 / 097258112X) "After the death of his son, a father takes the river voyage he has always dreamed of. Starting out from his family farm on the headwaters in the Sandhills of Nebraska, his inner voyage takes him to new acceptance of the son he never said goodbye to in life, while he faces the solitude and challenges of the river itself. The land plays as large a part of the story as do the people on the river. Lowen Clausen has written an exquisitely heartbreaking novel, with a soul as big as the eponymous river." --Tammy Domike, Jackson Street Books, Seattle, WA
Posted by Tammy at 11:47 PM No comments:

*Word Of The Year

If you've clicked through the knitting links on the sidebar you'd find a lexicographer talking about all things "wordy". What's your favorite new word?
Posted by Tammy at 7:32 PM 1 comment: