Department of Book Reports: A History of the End of the World 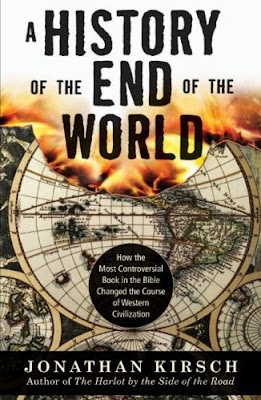 Well. if you find yourself still around today, ya know, left behind as it were, you might enjoy this book: A History of the End of the World: How the Most Controversial Book in the Bible Changed the Course of Western Civilization (Harper, $14.95, or used HC$15) Jonathan Kirsch is a biblical scholar, who really lays out the history of this single book in the Bible that has caused so much turmoil over the past 2,000 years. Long claimed to be authored by the John of the gospels, Kirsch argues it was actually written by yet another John, one with a real axe to grind about the Roman occupation of his day, some 50 to 60 years after the death of the Christ. He traces the origins of this controversial book right up to current times, and its ties to modern fundamentalist churches.

I wanted to go read reviews, to refresh my memory, since it's been a few years since I read this. At first I thought the New Oxford Review had a good overview, but I was disappointed by the conclusion:

Endeavors to marginalize people on the Religious Right (the narrative's bête noire) unfold as Kirsch blends spiritual thrill-seekers, stooges, and crackpots into the ranks of the reasonable devout. The Branch Davidians (of Janet Reno fame), the Heaven's Gate cult, and the Left Behind book series are employed to demonstrate Revelation at work on unstable minds, but Kirsch makes too much of low-level televangelist theater and weirdo tales spewing from discredited apocalyptic charlatans. The book continues a slide into political correctness, a newer feature of post-modernism that blurs morality and reduces integrity to negotiable transactions.

"spiritual thrill-seekers, stooges, and crackpots ", um, I pretty much think that's the folks we're seeing give $70M of donations in negotiable transactions. It may have seemed Kirsch was overstating when he wrote this book, but it kinda looks like time has proved him right. At least, this week.

Warning! This is an hour long panel discussion from the 2007 Los Angeles Festival of the Book. But hey, you got that long before you have to fly away.

The History of the End of the World is available at (Jackson Street) Books On 7th andfine Independent bookstores everywhere. Visit us on Facebook Jackson Street Books.
Posted by Tammy at 11:51 AM No comments: