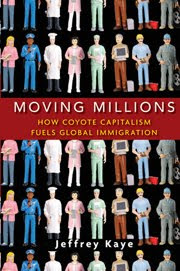 Jeffrey Kaye has written an important, and exhaustive study in Moving Millions: How Coyote Capitalism Fuels Global Immigration (John Wiley and Sons $27.95). Kaye, the son of English immigrants himself, is a well-regarded independent journalist and Special Correspondent for the PBS News Hour. And for this examination, he has traveled extensively, including the Philippines, Senegal and Europe.

A coyote in this context is a human smuggler. The smuggler trades in a needed commodity without regard to the wants and desires of that commodity. And, in so doing, Kaye reminds us: “Global and local businesses rely on human mobility and on ready, vulnerable pools of labor often available at bargain basement prices. The migrant-dependent industries are the same across the globe. Many of the world’s farm fields, hospitals, nursing homes, and construction sites would be losing enterprises if not for the work of foreign laborers. Ditto for hotels and restaurants, labor-intensive manufacturing, and low-skilled services.” Often these are the same people who tell us that illegal immigrants are the scourge of our nation. Their hatred is palpably hypocritical. (And in my humble opinion, when you hear these folks talk about English only, or English first, they ignore the fact that in the history of American immigration, unless the immigrants came from an English-speaking nation, the first generation always retained their native language and learned enough English to get along. My great-grandparents spoke German around the house and with their neighbors. It is the next generation that learns English; my grandfather was bi-lingual. I see it where I live where the Latino children speak English to each other and Spanish to their parents. English-first is code for Latino bashing.)

Kaye calls into question our current policies regarding immigration, quite rightly observing that if you build a 50 foot wall, someone will bring a 51 foot ladder. And he explains the connections between globalization, growth and the overarching and on-going debate on immigration in a clear, lucid style, with anecdotes, interviews and keen observation. For now, this book is the one to go to if one wants to understand the complexities of our times.

In full disclosure, the author is an old friend of mine. And the publisher was kind enough to send me a review copy gratis. For those of you in Second Life, Jeffrey will be the guest at the Virtually Speaking forum on Thursday, July 1st at 6:00 PDT. If you can't join us in Second Life, tune in here to listen live or catch the podcast later. As always, Moving Millions is availabe at Jackson Street Books and other fine Independent bookstores.

And, as always, books ordered here will have a freebie publishers Advance Reading Copy included as a thank you to our blogosphere friends.
Posted by SeattleDan at 11:05 PM 1 comment: