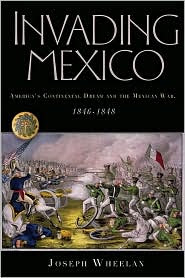 Joseph Wheelan has provided us a fine account of the Mexican War with his Invading Mexico: America’s Continental Dream and the Mexican War 1846-1848 (Carrol & Graf $27.95), the first of the wars fought by the U.S. on a dubious pretext.

James Polk, the first ‘Dark Horse’ nominee, was elected President in 1844, pledging to serve only one term (a pledge he kept), and with an ambitious agenda: the annexation of the Texas Republic; the settlement of the Northwest boundary with Great Britain; and the acquisition of the Mexican states known as the New Mexico and California, thus pushing the lands of the American republic to the Pacific Ocean. The annexation of Texas was actually accomplished on the last day of Polk’s predecessors’, John Tyler, administration. The Oregon territory boundary was settled by treaty, but not before a certain amount of saber-rattling, with the slogan 54-40 or Fight! 54-40 being the northern point of what is now British Columbia. But Mexico was unwilling to negotiate anything like the sale of New Mexico and California to the U.S, although the area was beyond what Mexico City could actually govern. Mexico had already been provoked by the annexation of Texas; and felt little tired of being pushed around by their Northern neighbors.

Not a problem for Polk! A border incident involving Zachary Taylor’s troops being attacked by Mexican soldiers was enough to get a declaration of war. Despite protests from European nations that the U.S. was engaged in war for national aggrandizement, and the incipient opposition to the war from U.S. citizens, the fight was on. Opponents of the war were castigated as traitors who did not support our troops.

Wheelan’s narrative is good reading. He weaves both U.S. and Mexican internal politics, the personalities, the military commanders, and the actual conduct of the campaign into a highly readable history. There were many luminaries involved. The U.S. snuck exiled General Santa Anna back into Mexico in hope that he would negotiate an end to the conflict. Instead, he led the fight against the encroaching Americans. Jefferson Davis, Robert E. Lee, Franklin Pierce and U.S. Grant all were combat heroes. John C. Fremont and Kit Carson appear in California, set to seize the area. Abraham Lincoln opposes the war in his one and only term in Congress. The battles are well described, and even in the fog of war, easy to follow with good maps. The smaller historical incidents, such as the St. Patrick Brigade, the San Patricos, an artillery battalion comprised of American deserters, mostly Irish Catholic immigrants who had been sorely abused by their commanders, and fought for the Mexicans at an ultimate high cost, are discussed with sympathy.

In the end, although Mexican troops always outnumbered the Americans, and the Mexican soldiers fought both bravely and fiercely, the Mexican Army faced what Wheelan tells us we’re the best equipped and trained field artillery in the world. The Mexican Generals were poor and/or indifferent planners, who provided the kind of leadership that cost them a good chunk of what had been Mexico.

Manifest Destiny could be a bitch, though. The annexed new territories sparked more debate on slavery and the states. It would be only a short twelve years following the Mexican War that slavery issue would be decided on battlefields all over our Republic.
Posted by SeattleDan at 12:46 AM No comments: 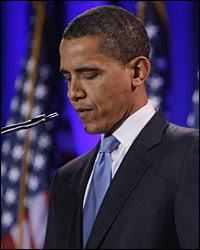 Today, Barack gave the most amazing speech. Eloquent, Lincolnesque, JFK and MLK ring here. This is a speech for the ages and you need to listen to it entirely.Peace Love and Understanding, my friends!
Posted by Tammy at 10:19 PM 3 comments: 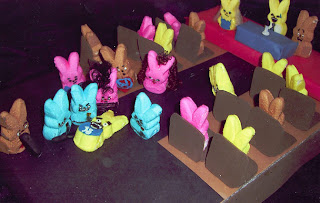 Our local paper has an annual contest this time of the year to use up the excesses of Springtime. Here's some sugar-y goodness that even the Great Lobster and FSM would approve of! 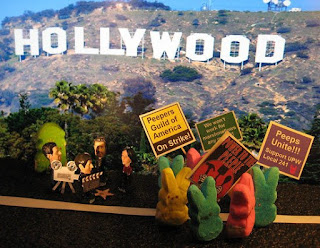 Elsewhere, they report on the Traveling Peep Show
Posted by Tammy at 12:01 PM 6 comments: