Well, welcome to Jackson Street Books! If you've followed this over from the Book Report, you know what you're supposed to do. Look around a while, we have some cool people to click on in the side-bar. We'll try to put up content on weekday evenings, ya know, AFTER work... On the weekends we'll spout about things that outrage us, if we have the time.

So, tell us your joke and keep it clean! (or as clean as possible!) 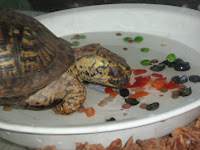 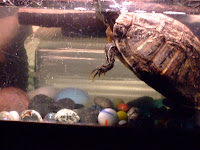 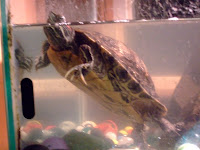 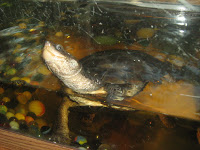 Since I've been busy writing tomorrow's Book Report, here's some turtle pictures for your amusement!
Posted by Tammy at 7:36 PM 3 comments:

She passed away today. A great short-story writer, and, more importantly, a Peace Activist.
Posted by SeattleDan at 9:49 PM 2 comments:

Here, via Crooks and Liars, is an excerpt from El Presidente's speech today at the VFW convention.

Graham Greene is spinning in his grave. I've read lots of GG's books, a wonderful writer, and believe me, The Quiet American, is a cautionary tale on how American policy interests in Southeast Asia will screw our country up. If you don't want to read the book, view the movie which stars Michael Caine and Brendan Fraser, as the Quiet American. It's NOT a pro-American interventionist book or movie. I just can't believe our President's gumption in citing Graham Greene, of all people, to bolster support for this freekin' war. But, I guess, no one at the VFW has ever read Graham Greene.

Greene was always highly suspicious of American foreign policy. He was Roman Catholic, a whore-hound, with a beautiful sense of creating characters, plotting, and could be just plain fun. Those of old enough to remember "Our Man in Havana" or "Travels with My Aunt" will know. He should have won a Nobel. But he didn't. Read him and remember him.

As to our President, shame on him for citing a very good book, and a great author, that he will never understand. No matter how much he wants to allude to him. What a jerk.


The American: I'm from a country that's been in existence for less than two hundred years, in a very old world. That same fifty years ago, we were barely taken seriously as a nation, much less a great force for wisdom and decision. But suddenly now, a watch tick of history later, the world waits angrily for us to provide the answers it hasn't been able to find in fifty centuries.


UPDATE: Thursday August 23 This guy says it better than me!
Posted by SeattleDan at 10:20 PM 3 comments:

This week’s Sunday New York Times Book Review offered a generally positive front page notice of Jack Kerouac’s On the Road: The Original Scroll (Viking $25.95), just issued in celebration of the book’s 50th anniversary.
The review reminded me of the story of the book’s origin. Jack had been trying to write a novel revolving around his cross-country trips with his friend, Neal Cassady, but without finding either the right hook or voice. Having recently married, Jack taped together a roll from a ream of paper; he then sat down, and in a three-week period, he wrote the novel, finding his voice in telling his new bride about his adventures. Flush with excitement, he took the Ms. to the editor of his first novel (the much more conventional The Town and the City), Robert Giroux, then of Harcourt Brace. Giroux reportedly said “ But, Jack, how can we make changes?”, not understanding that Jack, at that point, wasn’t really interested in making any changes. Kerouac believed in the purity of his spontaneous composition. Jack left Giroux’s office, and spent the next five years, tying to find a publisher. Eventually, the Ms. made its way into the capable hands of Malcolm Cowley at the Viking Press. Changes were made, and the book made a big splash when it was finally published.
My personal feeling is that Jack’s best work, and I believe he was a truly great writer, was the stuff Cowley had a hand in: On the Road and Dharma Bums. I do like much of Kerouac’s other, more spontaneous work: Subterraneans, Maggie Cassidty, Vanity of Dulouz But the stuff that will live is the work published by Viking.


Special Thanks to Thomas Hawk for the use of his photograph.
*update: I notice that this entry is still getting weekly hits via our sitemeter. This is a rare photo, due to the rules the "owners" have imposed at showings. This picture is copyright by Thomas Hawk. I am using it here because he gave me permission. Because I asked nicely. Please keep this in mind and do so also.
Posted by SeattleDan at 4:59 PM No comments:

Labels: books, kerouac, on the road

Can someone tell us how to make the email address in the side bar into a live link that creates an email?
Posted by SeattleDan at 8:12 AM 4 comments:

Sadly, This was Not the Winner

'I know what you're thinking, punk,' hissed Wordy Harry to his new Editor,'you're thinking, "Did he use six superfluous adjectives or only five?"--and to tell the truth, I forgot myself in all this excitement; but being as this is English, the most powerful language in the world, whose subtle nuances will blow your head clean off, you've got to ask yourself one question: "Do I feel loquacious?"--well do you punk?"

~Stuart Vasepuru's runner-up in the 2006 Bulwer-Lytton Fiction Contest
Posted by SeattleDan at 6:06 PM No comments: