Department of Book Reports: An Ocean Between Us 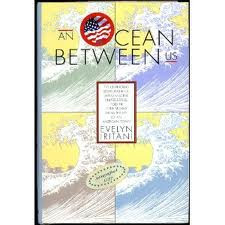 An Ocean Between Us, by Evelyn Iritani (Morrow, 1994)
We all know that saying about History repeating itself, and this book from 1994 shows several examples. Evelyn Iritani uses 4 stories to explain Washington states' fascination with all things Japan, and it has really had some resonance for me. She starts out with a story from 1834, when three sailors are ship wrecked off Neah Bay. I had never heard this story before! They were on a cargo ship, the Hojun-maru, limited to Japanese waters when a storm damaged their ship and carried them across the Pacific on the Kuroshio current. Taken as slaves by the Makah tribe, they were rescued by Dr. John McLoughlin, only to have his dreams of bartering them to open trade with Japan denied by the Tokugawa shogunate. They are given 30 coins and left to finally find lives outside Japan.

Next, looking at the early Yellow scares, leads us into the WWII internment of West Coast Japanese. It is here the Fear of the Other is closely echoed in today's treatment of the Mexicans in Arizona and elsewhere. Little was known of the actual attempted attacks by the Japan Army, their successful balloon campaign that killed a woman and 3 children in Blye,OR. Across the ocean, the Ohkuno Island Toxic Gas Factory employed school girls to build elaborate paper mache balloons that could drift across the Pacific with bombs as their payload. Following up with these students, Iritani tells us of the 50 year later reunions of these school girls and the families in Oregon.

In 1990, a Chinese tanker collides with a Japanese fishing boat, the Tenyo-maru and seventy thousand gallons of crude oil are spilled off the Olympic Peninsula. The local folks volunteer to rake up tar balls on the beach and send oiled birds to Seattle for re-hab. The fines in this case were leveled against the Chinese government, not the polluting fishing company company, leading the Makah to distrust the Japanese.

In the final story, we look at the take over of Port Angeles paper mill by the Daishowa company, and the conflicts that occur in a small town during the craze of Japanese Management circles and a time when it seemed their powerful economy was allowing them to buy any old American thing they wanted. The contrasting stories of union activist Dave Hoglund who tries to balance the new company's work styles and Yutaka Mochizuki, who tries to balance bringing his family to this strange new land. In this case, the new management was able to put money into long neglected facilities, that ultimately benefitted the workers and the town. Ironically, the mill was powered by cheap electricity from the salmon-decimating dam on the Elwha, now scheduled to be removed.

Throughout this book, I kept seeing much of the hysteria that is too prevalent now. I hope we will move past today's angst, and our better sides will prevail. In today's Washington state, kids adore Japan and all its trappings. I saw kids in Seattle studying Japanese and dutifully practicing their kanji . Our own son went to Tokyo with 2 other students for a field trip. I always found Chinatown & Japantown to be the most vibrant shopping districts, with the best Fruit & Veg stands, anywhere. Far from being a feared, reviled part of the populace, Japan has conquered the kids hearts and minds. And that is a good thing.

UPDATE: I was afraid I may have engaged in a bit of hyperbole in writing this book report. And then I saw this. 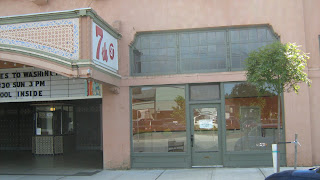 Here's something you all may be able to help us with. I'd like to rent this storefront, and have a tiny little bookstore. Thing is, I need some opening moneys. Rent is cheap, and I do think it can be recouped. But what's most exciting is a chance to have a bookstore in our local community. Much as I love the internets, there is nothing that replaces putting a book into someone's hands. I'd really like it if you bought a bunch of books, but if you're able to, and so inclined, a donation to our paypal will get you our undying loyalty.
I'm trying to figure out a bookstore membership format, that will get you a discount on orders. I'm fully aware that bookselling is a dinosaur in our current society and job force. I'm just crazy enough to love and want to continue doing it.

As always, books ordered here will have a freebie publishers Advance Reading Copy included as a thank you to our blogosphere friends.
Posted by Tammy at 12:37 AM 3 comments: