We only had one day at the show this year, But we were able to find lots of great upcoming books to tell you about. For you outdoor types, Monster Spotter's Guide to North America will help you plan those special hunting trips, and Backcountry Betty will help you rough it in style. Garth Stein will be showing us how to Race in the Rain in his upcoming HarperCollins title. It was good to see a couple of my favorite Mystery girrlfriends, Yasmine Galenorn was signing Changeling, the latest in her Urban Fantasy series. And Jo Dereske signed copies of Miss Zukas' latest adventure, Catalogue of Death. We met Alice Wilson-Fried, who signed Outside Child, her New Orleans Mystery at Jackson Street Books on Friday. I loved this one and it's so nice when an author is so gracious and wonderful as her book! Dan snagged up a couple things he had been looking forward to, including The Arsonists Guide to Writer's Homes in New England, and he really wants the Annotated Godfather. We couldn't manage to stuff a copy of that under his sweater.

This year's BadCat will be What Pets Do While You're At Work. Too funny. Stephen Colbert's I am America (And So Can You!) promises to bring us much truthiness this fall. 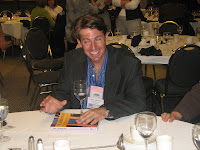 At the Feast of Authors dinner, we had 6 authors come to our table and tell us about their books. First up, John B. Schwartz, with his novel, The Commoner, the tale of the bride of Japan's 1959 emperor, and the life after one "crosses over" to behind the silk curtain of inscrutable Japanese Court. Interesting parallels here with what Diana's experience must have been. 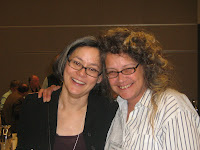 I had to get a picture with Meg Tilly (that's her on the left), cause it's not very often I met up with a gal who also had to milk cows in her youth. Growing up in poverty on British Columbia farms informs her new YA novel: Porcupine. 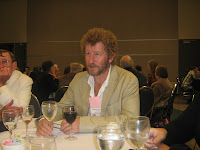 Sebastion Faulks has the story of Engleby, a man who can't remember if he is responsible for the death of a woman and so continues on with his life. Twenty years later, things come crashing down around him. 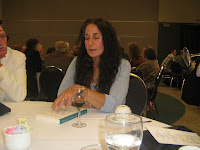 Lauren Kessler had me in tears with her memoir, Dancing with Grace, Finding Life in the Land of Alzheimer's. Her mother died of Alzheimer's Disease, and she spent time working at an old age home to show us that even though so much of that person is gone, so much still remains and how to stay in the life of an Alzheimer's victim, without breaking your heart. This will become an important book as our parents and friends age. 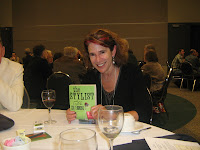 Cai Emmons has written The Stylist, a novel set in the world of Hair Salons, and their inner workings. Since one of her characters is Trans-gendered, she has been asked to come speak at national Trans-gender conventions! I've just started this one and it's quite good.

It looks like it'll be a good Fall and Winter in the land of Independent Book Stores. These books and all of the Holiday Catalogue titles will be available at Jackson Street Books

Noted legal author Jeffrey Toobin’s new study The Nine: Inside the Secret World of the Supreme Court (Doubleday $27.95) is available. Nina Totenberg, the NPR Supreme Court reporter, had some kind words for it the other day on All Things Considered. I just started it, and so far, it reads well and I am learning a great deal about the workings of our legal branch. The prolific and hilarious Terry Pratchett has a new novel, Making Money (Harper $25.95). I’d try to summarize the plot for you, but in reading the flap copy, it’s seems to be convoluted. And funny. Last year’s recipient of the Nobel Prize in literature, Orhan Pamuk, has published Other Colors: Essays and a Story (Knopf $27.95). Included in the collection are essays about his life,Istanbul, and other authors.

Now available in paperback is Amy and David Goodman’s Static: Government Liars, Media Cheerleaders, and the People Who Fight Back (Hyperion $13.95). Amy is the host of Democracy Now and her brother David is an investigative journalist. Jonathan Kirsch’s fine A History of the End of the World: How the Most Controversial Book in the Bible Changed the Course of Western Civilization (HarperOne $14.95) studies the Book of Revelations, giving us it’s context, as well as it’s implications and how it has been so misused. Tammy recommends.

Alice Walker checks in with a new children’s picture book Why War is Never a Good Idea (HarperCollins $16.99) with illustrations by Stefano Vitale.
Posted by SeattleDan at 6:49 PM 3 comments:

Last night we attended the taping of "Says You!". It's fun to see the whole program being put together and try to guess what will be left in the final airing. Not so fun, the people behind us who had to voice their (often incorrect) guesses. Or the woman in front of us who informed Richard Sher loudly the the Pike Place Market Pig is named "Matilda". I really thought these people were being so noisy the questions would be disqualified.

They tape two episodes, back to back, so now you can see why every other week, the cast seems a bit punch-drunk. They were quite silly on the second round. The two kids who were scoring, also held up the word for the audience to see, and listen closely for the audience reaction to "Bick"; the kid held the sheet of paper up upside down!

Town Hall is a lovely venue, but last night was too darn hot! The panelists were taking off their jackets and rolling up sleeves. Paula Lyons finally asked if doors could be opened in sympathy for the women (of a certain age) in the audience fanning themselves.

The Garfield High School String Quartet provided lovely music, and we got to hear the song by itself, presumably so that Richard Sher's voice can be over-lapped later. I can see they do a lot of layering to produce this show, as opposed to "Wait, Wait! Don't Tell Me!" that tries for the first take and then re-caps what doesn't work after the main run-through.

*so, what do the words in this headline mean? If you don't know, you'll have to tune in starting October 6th, for the airing of the Seattle episodes. We aren't telling!
Posted by Tammy at 6:04 PM 2 comments: