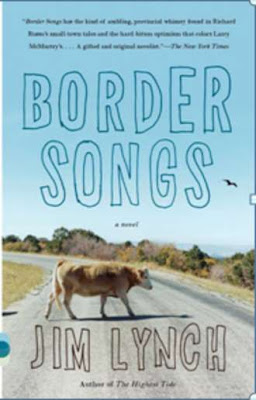 Border Songs, by Jim Lynch (Knopf paper $16) Six foot eight inch Brandon Vanderkool has always stuck out. His dyslexia and attention to the details of the landscape and birds give him a unique perspective as a new Border Patrol officer. Noticing details that others miss as soon gotten him the title of "Shit Magnet" among the rest of the patrol. He mother is slipping more and more into early onset alzheimer's, while his father worries over the condition of his diary cows health, and the boat he has been building in a back barn but may never finish and sail.

This story is set along the once casual border, near the Peace Arch, where lucrative smuggling has lured locals into helping both people and B.C. Bud into America. Brandon's life-long friends and townspeople all seem involved in the now lucrative transportation. Canadian mountains sprout McMansions overlooking what had been diaries, now turned to raspberry farms complete with immigrant workers.

The job gives Brandon plenty of time to indulge in his daily Bird Counts and his art; patterns in leaves and stones which he compulsively builds. This natural art is compared to Andrews Goldsworthy by a neighbor who puts on an opening for the town on the day the new Casino opens up the road. After I finished reading this, we watched  "Rivers and Tides" which I very much recommend:


Jim Lynch is also the author of the Award-winning YA novel, Highest Tide and the forthcoming Truth Like The Sun, which looks at the 50th Anniversary of  the Seattle World's Fair(!) On April 29th, I'll be selling books at his Westport appearance, sponsored by the Timberland Library. Let me know if you'd like a signed copy then, or your can get unsigned copies from us now.
Posted by Tammy at 4:10 PM No comments: