Department of Book Reports: 1959: The Year Everything Changed 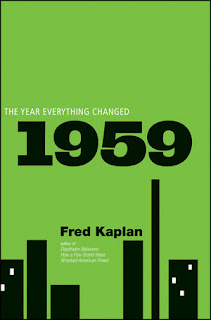 Fred Kaplan's 1959: The Year Everything Changed (John Wiley and Sons $27.95) chronicles an extraordinary year. On January 1st, Fidel Castro's revolutionaries took power in Cuba. On January 4th Soviet Deputy Premier Anastas Mikoyan visited the United States. Fidel would do the same on April 15th, followed by Khrushchev on September 15th. On April 9th, Lenny Bruce appeared on television. On March 17th, excerpts from William Burrough's Naked Lunch were published in the literary magazine Big Table which were promptly seized by the office of the Postmaster General on the 18th. A busy year for the Postmaster, who was sued by Barney Rosset of the Grove Press for confiscating copies of the newly published and unexpurgated edition of Lady Chatterly's Lover on April 28th. On March 13th, the now largely forgotten Herman Kahn began his lecture tour on how he stopped worrying about the Bomb and learned to love it. On March 2nd, Miles Davis began recording Kind of Blue; John Coltrane would step into the studio on May 4th to record Giant Steps; and on June 25th, the day the Kind of Blue sessions ended, Dave Brubeck began work on Time Out. On July 13th, the documentary from Mike Wallace, The Hate That Hate Produced, on Malcolm X was aired. On July 23rd G.D. Searle sought FDA approval for its birth control pill. On November 11th, John Cassevetes' film, Shadows, opened, followed Truffaut's 400 Blows on November 16th. And on November 19th, Ford ceased production on the Edsel. All these things happened, and more. Kaplan gives the details in a fine narration.

I suppose my only quibble would be that Kaplan completely ignores the Triumph of the Los Angeles Dodgers over the Chicago White Sox in the Fall Classic. There was a young boy at game three, played on Sunday October 4th, just five days shy of his ninth birthday, a game he'll never forget. It was the swan song for the Boys of Summer, and Carl Furillo delivered the game winning hit in the 7th inning. That young boy's future dearly beloved was a rollicking three month old baby. How did that get by Kaplan? In any event, it is a fun book.

On another note, I'd like to point out that today is National Bookstore Day. If you can, please go visit yourfavorite independent bookseller and show them some love.

Jackson Street Books is proud to present Jess Walter at Lacamas Hall.
The Financial Lives of the Poets

“In Jess Walter's best yet, feckless financial reporter Matt Prior has lost his job, is six days away from losing his house, and suspects his wife is courting an affair. Walter's own obvious empathy for the human condition will have you pulling for Prior and his screwy, shady, last-chance scheme for solvency. A laugh-out-loud serio-comic masterpiece!”

Jess Walter is the author of five novels, including The Zero, a finalist for the 2006 National Book Award and Citizen Vince, winner of the 2005 Edgar Allan Poe Award for best novel. He has been a finalist for the L.A. Times Book Prize and the PEN USA Literary Prize in both fiction and nonfiction.
Another 7/11

I have lived all my life in big cities. I grew up in LA; I went to grad school and then began my career in Portland, Or.; and up until last year, lived for 33 years in Seattle. So the adjustment to living in a small town has proven interesting, to say the least. Not that I don't love it. The Harbor is a sweet place to live. The pace is low-key. The natives are friendly. In fact, Hoquiam boasts to being the friendliest town in Washington State.

But the thing that has really struck me in this election season is that I actually get to vote for County Coroner. I've never lived in a place where the position of coroner is an elected office. And not only is it an elected office, it is a partisan office. Who knew? 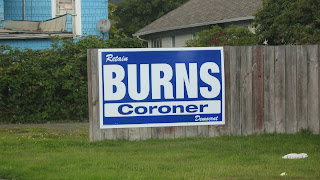 As it turns out, both candidates here are Democrats. That is good, because I don't want a Republican performing my autopsy. One of the candidates is a nurse. The other is the current coroner who was appointed to the office after the previous coroner moved onto another position. We ended up voting for the current office holder. But you can see both candidates campaign signs all over town and in Aberdeen. 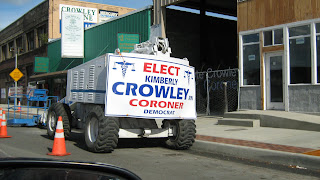 There were a couple of other important ballot issues. One is designed to overturn the Washington State Legislature's "Everything but Marriage" law that granted our gay citizens equality in all things, except for marriage. We voted, of course, to retain the new law, even if means destroying our marriage, which I'm sure is part of teh gay agenda. 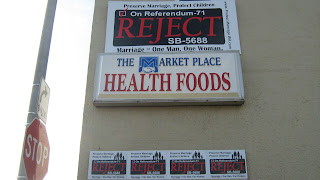 The other is an initiative to cap government revenue sources and was promoted by our state wingnut, Tim Eyman. Surely something we need; cripple government during a recession.

Anyway, that's the scoop from our little town for now.
Posted by SeattleDan at 5:14 PM 5 comments: