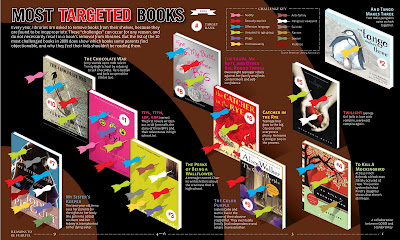 For the past thirty years, the last week of September has been Banned Books Week, a celebration of the Freedom to Read and the First Amendment, and this year is sponsored by the American Library Association, the American Booksellers Association, American Booksellers Foundation for Free Experession, the Comic Book Legal Defense Fund, the PEN American Center, among others. Libraries and bookstores across our great land will have displays of the many books that have, at one time or another, been suppressed in some fashion.

What are some of these tomes? Some examples:

To Kill a Mockingbird by Harper Lee has been challenged many times, including in 1980 by the Vernon Verona Sherill New York School District as a "filthy, trashy novel". I've read it a few times, and I guess I missed that part.

Alice Walker's The Color Purple has also been challenged and banned. The Souderton PA School District banned it as "smut" in 1992 as inappropriate 10th grade reading.

Ulysses by James Joyce was banned from the United States, England and Ireland for obscenity during the 1920's and not because it was deemed "too long".

Lolita by Vladimir Nabokov was banned as obsecne in France from 1956-1959, England in 1959, and Argentina that same year. Florida's Marion County had its DA office look into the book for ideas of incest and pedophilia.

Even winning Nobel Prize in literature does not keep a writer from censorial minds. Toni Morrison's Beloved has also been challenged many times. In 2007 two parents objected to the use of the book in an AP high school English class because it addressed issues of bestiality, racism and sex. The Principal of the school ordered it replaced by Hawthorne's The Scarlet Letter, which, of course, has nothing to do with sex. Other Nobel Prize winners whose books have been banned include John Steinbeck (both The Grapes of Wrath and Of Mice and Men); Ernest Hemingway (For Whom the Bell Tolls...did the Earth move for you, too?); William Faulkner (As I Lay Dying); and F. Scott Fitzgerald (The Great Gatsby).

This past Monday the School Board of Monarch, Kansas voted to end the ban in the school library of Kurt Vonnegut's Slaughterhouse Five. Kind of. The kids cant really check it out, but it is available in certain portion there for their parents to check it out for them. The Vonnegut Library has made an offer to help kids decide for themselves.

These obscene books are available from Jackson Street Books and other fine independent bookstores.

What are your favorite banned books?
Posted by SeattleDan at 11:07 PM 2 comments: