Made me finally write my "This I Believe". I'll polish it up a bit before I send it to Jay Allison....

My Rant,
*with added Robin Williams!

Way back in the day, when Jackson Street Books had a storefront, I was excited to host Kristen Rowe-Finkbeiner for "The F-Word: Feminism". I promoted it and was joined by a powerfull ally, Mara, a SU prof of Women's Studies (!)

I got it in all the newspapers, newsletters, blogs, did EVERYTHING. Mara promoted the event heavily in all her networks.
On that day in Seattle, you could have bopped around to authors all day:
Ted Rall, Elliot Bay Books Noon
Kristen Rowe-Finkbeiner, Jackson Street Books 1 pm
Krist Novasellic Elliot Bay Books 3 pm
Angela Davis at the Westin Grand Ballroom 6pm
and there were a couple others that day.

5 women showed up, 2 brought books from Amazon purchases, cause they weren't sure the bookstore would have books for sale. 2 were Mara and I. Nina bought her copy from us. I had made fussy little cookies to serve at the signing. I had free teeshirts with rhinestones for each purshase. 'F-Word Voter' in babydoll pinks.
To say I was bitterly disappointed...

Talking with Mara later, she told me:
"Serve the Ones that Come to Your Table."

Huh? That threw me. My *most respected Feminist Icon* tells me to serve the ones who come to my table. I had to think about it. A lot.

Serve the ones that come to your table.

My Second Life friend Nickee Ninetails has entered a photo she created the set for and took, in world. If you have a Flickr account, please go favorite her picture. She wrote about her inspiration for this piece: 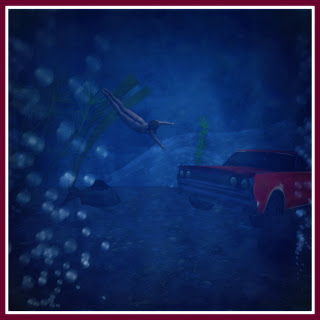 If you are interested in peeking at how this set (stage) was built, I'd be happy to show you in world. Just message me!

Here's a link to see Tim Burtons version of this scene
Big Fish Trailer, the first scene is my motivation

This past March marked the 4th anniversary of the day I gathered with family and friends to say a final goodbye to one of the classiest women I've ever known. Michel and I met when we were 6, did Girl Scouts, school, emotions and life with each other close in heart. We shared our baby stories and love stories and LIFE stories. My friendship with her has outlasted any relationship outside of family.

Her body held an old soul, who seemed to understand things far beyond the 'sight' of others.
She loved deeply.
She fought for what she believed to be right.
She learned to stand up for herself.
She learned how to be completely broken and rebuild.
My respect and love for her has no end.

Michel's legacy is one of honesty, strength, laughter, a love of holidays and of family. Her legacy lives on in those of us who knew her and were ever so fortunate to be graced with her smiles.

When she was so bravely battling the cancer that robbed us of her, she watched Tim Burton's Big Fish over and over again. Somehow it helped her start to say goodbye. She feared not being remembered by her youngest son, but she also told me this movie helped her remember the bright and happy things about life.

She is the inspiration for my Burtonesque choice.

Thank you for your consideration
~Nickee~