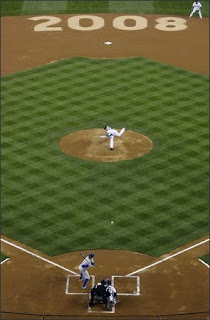 Ah, the first pitches have been thrown, the first swings have been taken, and the season starts. How could April be the cruelest month, when baseball is here? In Seattle, Safeco Field had the roof closed for the Mariner opener; outside there was snow, then hail, followed by bursts of sunshine, as if the game were being played in the Midwest in early spring.

There is an adage when it comes to sports writing that the smaller the ball, the better the writing. I’m not familiar with great writing on golf or tennis, so I guess that leaves me to recommend some new baseball books.

Jim Reisler’s The Best Game Ever: Pirates vs. Yankees October 13, 1960 (Carroll and Graf $26.00) is fine baseball writing. After years of cellar dwelling, the Pittsburgh Pirates had slowly rebuilt their team during the 1950’s, signing good pitchers such as Vernon Law and Bob Friend, as well as position players like Dick Groat and the great Roberto Clemente. In 1960, the Pirates put it all together and won the National League pennant. In the Series that year they faced the Yankee juggernaut, a team that included Whitey Ford, Mickey Mantle, Roger Maris and Yogi Berra. In the seven game series, the Yankees proved very dominant indeed in the games they won, beating the Pirates by scores of 16-3, 10-0 and 12-0. But the Pirates hung tough and won three games of their own, going into game seven.

Reisler weaves his account of this game around each inning with deft social history and biography of the people involved. Pittsburgh was still ‘steel town’, a working class city that at that time ranked 16th highest in US city population. (It is now 51st). The players did not belong to a union, and though they were well-paid for that time, they were certainly not rich, and most held off-season jobs. 1960 was also an election year, and both Kennedy and Nixon campaigned heavily in Pennsylvania.

The game itself was a see-saw affair, with the Pirates taking the early lead, only to lose it to the Yanks. Pittsburgh came back to lead again, only to see the Bronx Bombers tie it up in the top of the ninth, setting up Bill Mazeroski’s at bat against Ralph Terry in the bottom of the ninth. As Reisler reminds us, no one who was alive in Pittsburgh on that day will ever forget where and when they heard on the radio Maz’s shot over the left field wall of old Forbes Field to provide the only walk-off home run to end a seven game World Series.

Another fun book is from the group at Baseball Prospectus and edited by Steve Goldman, It Ain’t Over ‘Til It’s Over (Basic Books $25.95), which examines some of the classic Pennant races over the years. It looks at such teams as the 1967 ‘miraculous’ Red Sox, the 1964 Cardinals that won over a Phillies team that had lead most of the way, the 1944 St. Louis Browns in the only year that franchise won a pennant, and, my favorite, the 1959 LA Dodgers who blended an old team of the “Boys of Summer” with new players like Sandy Koufax and Maury Wills. (My favorite because I was a nine-year old lad who was fortunate enough to have his grandpa take him the third game of the World Series that year; the Dodgers beat the White Sox 3-1.) This book is geared to statheads, but isn’t limited to them. The races are well-narrated so that even those fans who don’t like stats will enjoy the book.

Both of these books are available at Jackson Street Books and fine Independent Bookstores everywhere!

Well, I’m off to my fantasy baseball draft. Wish me luck.
Posted by SeattleDan at 12:06 AM 2 comments: 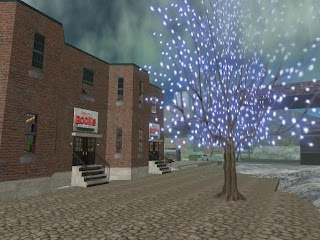 The blue tree in the backyard. 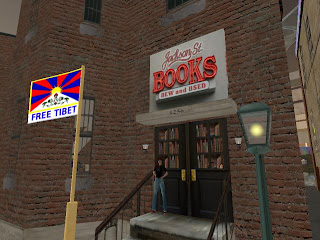 Front door looking over at Birdland, a jazz club devoted to Coltrane! 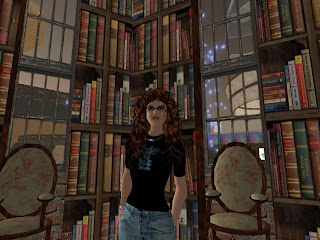 One of the reading rooms. 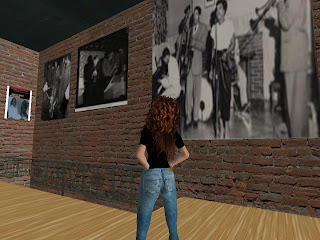 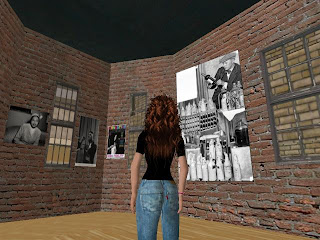 Upstairs, I have a photo gallery of historic Jackson Street, to show Second Life our hood.
Jackson Street Books is now virtual!
Posted by Tammy at 7:09 PM 5 comments: