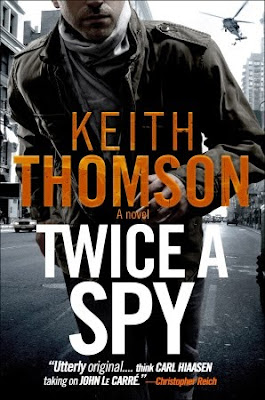 Twice a Spy by Keith Thomson (Doubeday, $25.95) In this delightful follow up to last years Once a Spy (Now in paperback Bantam, $7.99) we find Charley Clark in Switzerland hoping a new therapy will help his father Drummond's advancing Alzheimer's. NSA operative has accompanied them and is trying to exonerate them from their hasty departure following the explosions in the basement of the Manhattan Project.

Their peaceful time in the chalet won't last long though, before Alice is kidnapped by members from Drummond's old CIA op, the Calvary. The Calvary was established to sell inoperative nuclear weapons to the black market, disguised as Perriman washing machines. One machine is still at large in the Caribbean. Thomson uses brilliant plot twists to produce a fast-paced suspenseful action read with plenty of hight-tech spycraft. As if this weren't enough, his writing has wildly humorous bits and characters you will really come to love. You can check out more of his writings at Huffington Post.

Once and Twice a Spy are available at (Jackson Street) Books On 7th andfine Independent bookstores everywhere. Visit us on Facebook Jackson Street Books.
Posted by Tammy at 2:43 PM 2 comments: