Today I saw the next President of the United States. 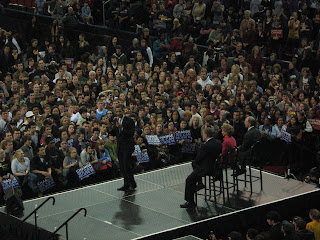 This morning I decided I would brave the crowds and make my way down to Key Arena. I'll be writing a Rant letter about my bus driver, who told all the groups of people at bus stops that she would only go as far as Virginia St, and they needed to wait for the next bus to go to the Seattle Center. That meant all these people would have to wait 20 to 30 minutes for the next bus. Then she would laugh to the "regular" riders that "We'd be too full if I picked up those people." And there were crowds. This is the line in front of me and you can't see it, but we will have to walk almost a round a block to get to the doors. 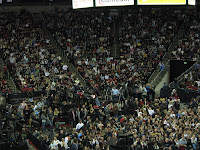 Although the doors opened at 11, canned music and videos of speeches played for almost 2 hours. They were trying to set up speakers for the 3,000 overflow crowd that couldn't get in. 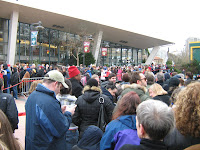 I couldn't hear some of the speech, the sound quality was sports stadium at best. And the crowds cheered and clapped until my ears rang. It was glorious!

I'm not a fan of Hizzoner Nickels, but he did crack me up with his opening line "It's a good thing that I gave the Fire Marshall the day off, cause this building holds 18,000 people and there are more than that in here!" 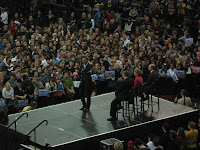 Obama spoke about the economy, health care and education. But what I was most impressed with, as he spoke he casually strolled over to the two bottles of water set on the stage for him, and casually lobbed one into the audience in front of him. Continuing his sentence but clearly watching the third row of the crowd, suddenly he stopped himself and said we have a young woman here who needs help, can we get her some space, can we move her over to the side, there's a chair over here... She had fainted and the people around her fanned her and stayed with her until a stretcher could be brought in. And then he noted that she was being taken care of, and wished her well. 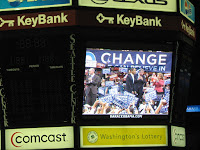 Now I'm just hoping that my.barackobama.com posts the speech soon so I can hear it this time!

Be sure to go to your Caucus tomorrow!
Posted by Tammy at 6:41 PM 3 comments:


And, Lake Woebegon has a lotta Obama posters popping up around the neighborhoods!

Update: Very interesting post from our friend Dave vE concerning David Rees of Get Your War On!
Posted by Tammy at 9:18 PM 1 comment:

the update from the red state. I love these guys!

Joan Baez has endorsed a candidate. Stop the planet!
Posted by Tammy at 12:11 AM 4 comments: