Why I've always loved me some Randy Newman! And, if this picture doesn't tell you why we need to do something right in Africa, well, nothing will. We Want Peace

Arthur Conan Doyle wanted to be remembered for more than Sherlock Holmes. Too bad for him. 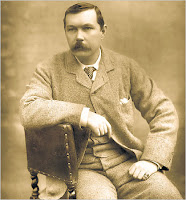 JEREMY McCARTER just doesn't get it.

This review reminded me of the one-short story piece I attempted. I sent it off to Stuart McLean.

Dec 1st, we were snowed in and unable to attend the first showing of Vinyl Cafe in America. DAMMIT! Our one holiday extravagance.

We had a lovely night dancing anyway.

It was a slow afternoon at the bookstore and I was by myself while my co-workers were out getting their lunches. A young man entered the shop, quickly tucking a small beanie-baby sort of toy into his pocket.
When I asked if he was after something particular, he said “No, just browsing.” After a circle of the shelves he came back to the front desk and asked if we had any Sherlock Holmes stories. Relieved that it wasn’t the usual lame, jokey or idiotic questions one can get asked in a Mystery Bookstore, I took him to the Sherlockian section. He said he wanted the complete stories, so I recommended the Doubleday hardcover or the Bantam paperbacks in two volumes. He shook his head “No, I want the true stories, the cases Holmes actually solved.” I realized the level of his sincerity and slowly, carefully told him that “Sherlock Holmes and Doctor Watson were fictional creations of Sir Arthur Conan Doyle, later in life, Doyle became interested in para-normal occurrences and spiritualism, and this book is a study of the ‘true’ things Doyle investigated.” His shoulders slumped and something seemed to go out of him. “Have you ever had one of those days when everything you thought was true turns out to be wrong?” he asked me with the saddest eyes I’ve ever seen on a seventeen year old. “Yes” I said, “Yes I have.”
He looked away a moment, then tried to straighten up. “Want to see something cute?”
“Okay” I said as he pulled the stuffed toy kitten out of his pocket and faced it towards me. “Yes, that is very cute” I said, as I realized the kitten had the same sad eyes as the young man in front of me.
“Okay, thanks” he said as he turned to leave. “Are you going to be okay, honey?” I asked desperately wishing I could hug him. “Yeah” he replied over world- weary shoulders. “You take care of yourself” I called after him.
I don’t know what else was not true for that young man and I don’t know what made him so sad. But for a moment I stood and looked out the window and for the first time in my life I really, really wished Sherlock Holmes was real.

I'm also reminded of a lovely visit with Leslie Klinger, who told of a die-hard fan, she was going to have herself hyp-mo-tizd, so she could re-read Sherlock, his annotated version, for the first time, again.
Posted by Tammy at 10:21 PM 4 comments: