Department of Book Reports:We Were Stardust 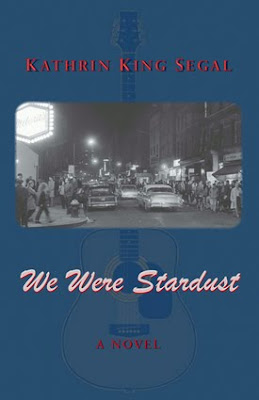 "I found my grandmother on eBay." Juliette, our young narrator tells of finding bits from her grandmother's life, unknown to her family after she put her baby, Juliette's father up for adoption in 1971. Juliette catalogs her finds for us, the posters, the newspaper clippings, the glossy photos and LPs, and uses them to piece together the years in smoking night clubs and coffee houses. Juliette assures us the story is "mostly true".

We Were Stardust follows a cast of friends as they each try to find their place in the early Rock and Roll years. Julie will dazzle and spin through their lives, her bi-polar depression will spin her further and further from their lives, even as she worries it will be they who abandon her. She is madly in love with Luke, who will go onto the record deals and platinum records. Elliott who wants to be a music producer and finds himself partnered with Mafia, Arlene who will become his dutiful wife, and Rochelle, who ends up being the sensible business woman. Record deals and betrayals will split them up and reunite them in unexpected ways.

The world of music is lovingly re-imagined here, all the major points and places will have you remembering those days from Woodstock to the day Peter Thorkelson mentions he has a call-back from his audition for this new television show just being cast: The Monkees. New York to the L.A. scene, real life events reverberate this novel. Juliette gives us the proof in her eBay purchases, the ticket stubs and forty-fives and their winning bid price.

This is a world Kathrin, a writer, singer, songwriter and actor knows well, her own music and voice grew up in New York and she really did meet the many musicians who flicker across the pages in cameos. Kathrin was part of these early scenes and, as she says: She can remember the 60's! I recommend this as a great read for anyone looking for characters you come to love and a story you really wish wouldn't end. I just hope we don't have to wait another 20 years to read Juliette's story.

Jackson Street Books has signed copies of We Were Stardust, and you can find out more at Kathrin's website and purchase copies of her CDs. Her novel's FB page is here.

Congratulations, Kathrin! We are so happy to see this book in print!
Posted by Tammy at 10:03 AM 1 comment: