In Guernica (Bloomsbury $15.00), Dave Boling has written a fine, sobering. and engrossing account of the lives of those people who live in or near one of the most revered places of the Basque people. The story is centered on the lives of the Ansotegui brothers, who are orphaned at an early age. Justo grows up to become the "strongest" man in Guernica, well-respected among the townsfolk; Josepe takes up fishing in the Bay of Biscay; and baby Xabier becomes Father Xabier.

In 1935 one Miguel Navarro, avoiding arrest after an encounter with the Guardia Civil, comes to Guernica, where he meets, courts and marries Justo's daughter, his only child, Miren, famed for her dancing. Together they begin a family. In the meantime, of course, the Spanish Civil War begins. The Basques, given some autonomy, and with an aversion to the Fascists, side with the Spanish Government. The characters try to lead normal lives, but the war moves closer. Food becomes scarce. And the Fascists move closer and closer, aiming to take the port of Bilbao. Guernica itself is of no military importance. But it does provide the Fascist's ally, the German Luftwaffe to indulge in what Winston Churchill called "..an experimental horror". On April 26th, 1937, Wolfram von Richtohofen's Condor Legion made its bombing raid over Guernica, devastating the town and immortalized in the famous mural of Pablo Picasso. The lives of Guernica's survivors are forever changed. And there seems to be little hope left.

Boling gives a splendid picture of the Basque people. Their lives may seem simple at a glance, but they live lives of great passion and with verve and nuance. The minor characters are well-imagined and provide a fine background to the story. The reader feels he knows this town and these people, and their tragedies give us the right amount of pity and terror. Guernica is one of the better novels I have read in a long while, and it is well worth your while to read it, especially if you like family sagas in historical settings.
Here's a video from one of those fine independent bookstores we always mention, Liberty Bay Books in Poulsbo. Catch their blog for pairings of books and appropriate beers, and follow them on twitter @LIBERTYBAYBOOKS.

Guernica is available at Jackson Street Books and other fine Independent bookstores.

As always, books ordered here will have a freebie publishers Advance Reading Copy included as a thank you to our blogosphere friends.

On a side note, I wanted to point out the long-time Jesus' General commenter, Dave von Ebers, has begun a new blog, The Corner Tavern, which you can find here: davescornertavern.blogspot.com. There is already a lot of good stuff on it. Enjoy!
Posted by SeattleDan at 10:48 PM No comments: 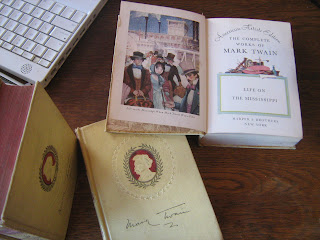 Alice asked if there was any notation of the artists in the Harper & Brothers editions of Mark Twain that I featured on FaceBook. The books, which are probably the equivalent to our modern mass-market editions have little documentation. However, researching the subject has been no end of amusement for me.
Barbara Schmidt notes the artists from the various volumes in her A History of and Guide to Uniform Editions of Mark Twain's Works. Most of the documentation here is for the earlier deluxe editions in red, Part One covers 1891-1920, Part Two has 1899-1920, while we have copies with cream boards with a small cameo of Twain embossed onto the front cover, which will be documented in Part Three, books after 1920.

In Life on the Mississippi, Harper & Brothers 1917, I discovered the photographer Napoleon Sarony, who photographed an estimated 20,000 celebrities of the day and perhaps 300,000 members of the general public, but it best known for his landmark 1883 lawsuit for photographers to claim original copyright of their photographs. The case was over a disputed photograph of Oscar Wilde, in which Burows-Giles Lithographic argued that Sarony had not invented Oscar Wilde and they should be able to use it in a department store ad. The courts agreed with Sarony's lawyers that the photographer was the author and inventor of the photograph.
In 1884, Sarony participated in a April Fool's prank on Twain inwhich 150 of Twain's friend wrote him requesting his autograph but neglecting to include a SASE for return. Sarony addressed his note to "My dear Clements".

Napoleon Sarony wore a Fez and "picturesque" clothing which must have been noticed even in New York city. 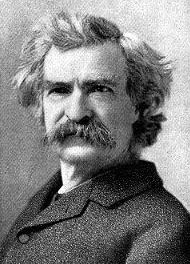 What is perhaps Sarony's best known photograph of Twain was most disliked by Twain. Writing in his own 1902 copy of a honorarium book presented by Harper & Brothers at his 67th birthday party,

of course they would frontispiece it with this damned old libel, which began as a libel when Sarony made it, in my fortieth year

The picture most likely was taken when Twain was 60. In 1905, he was still complaining about the photograph:

That alleged portrait has a private history. Sarony was as much of an enthusiast about wild animals as he was about photography; and when Du Chaillu brought the first Gorilla to this country in 1819 he came to me in a fever of excitement and asked me if my father was of record and authentic. I said he was; then Sarony, without any abatement of his excitement asked if my grandfather also was of record and authentic. I said he was. Then Sarony, with still rising excitement and with joy added to it, said he had found my great grandfather in the person of the gorilla and had recognized him at once by his resemblance to me. I was deeply hurt but did not reveal this, because I knew Sarony meant no offense for the gorilla had not done him any harm, and he was not a man who would say an unkind thing about a gorilla wantonly. I went with him to inspect the ancestor, and examined him from several points of view, without being able to detect anything more than a passing resemblance. "Wait," said Sarony with strong confidence, "let me show you." He borrowed my overcoat and put it on the gorilla. The result was surprising. I saw that the gorilla while not looking distinctly like me was exactly what my great grandfather would have looked like if I had had one. Sarony photographed the creature in that overcoat, and spread the picture about the world. It has remained spread about the world ever since. It turns up every week in some newspaper somewhere or other. It is not my favorite, but to my exasperation it is everybody else's. Do you think you could get it suppressed for me? I will pay the limit.

I'll continue my research tomorrow. I doubt I'll find the artists from these books, but I am sure I'll find something utterly fascinating.
Posted by Tammy at 4:54 PM 1 comment: