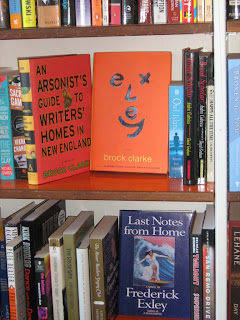 I've been in a Brock Clarke reading binge lately, and I really recommend this author for his sly, lit-obsessive novels. If you like your dark comedy with lovable characters, this is your writer. An Arsonist's Guide to Writers' Homes in New England was chockablock with famous writers and odd factoids as we follow Sam Pulisfer in his quest to find out who is trying to burn down the writers' homes. Sure, he once burned down Emily Dickenson's house, but that was a teen-aged accident and he's sorry. Really, really sorry. Some one else begins burning writer's homes after he has re-built his life, is it the son of the couple burned alive while "in the saddle", or the Bond Traders he met in prison? He knows he isn't setting these fires, but he must figure out who is and convince the fire detective of his innocence. His search takes him through Book Clubs, Harry Potter appreciation classes for parents, and Oprah lit-land . Clarke has a way of looking at ordinary situations and putting in a dry, quirky slant that will have you snickering at each wry twist.

In his latest, Exley, he uses his love for the late novelist Frederick Exley to build his novel. Miller Le Ray overhead his father tell his mother "Maybe I should go to Iraq, too" eight months ago, and knows in his heart that is why he's only written one letter home in all that time. His mother is equally convinced that the Army would never have accepted her husband, and has taken Miller to a therapist, Dr Pahnee (who pompously corrects everyone, assuring them he is a mental health professional). Miller and the Dr. are our unreliable narrators here. Miller's dad has just arrived at the VA hospital and Miller is convinced he must find his fathers favorite author to help bring him out of the coma he's been in for two weeks.
Miller's dad has only read one book in the past 15 years. A Fan's Notes, a fictional memoir, Exley's cult novel from 1968. He's read it over and over, and has eight copies stashed in the window seat beside his desk. You don't have to have read a Fan's Notes to enjoy this book, but I'm sure you'll want to after you finish.

Millers quest takes him through the Watertown, NY he currently lives in, and through the Watertown in a Fans Notes. His obsession begins to consume his every thought, and he begins speaking as Exley did, referring to people by initials, and using ___s in his speech. Conveniently ignoring the fact that Exley died in 1992, he searches the dives and haunts from the book. Dr. Pahnee has fallen hopelessly in love with M.'s mother which clouds his judgement. Which reality is true here? Clarke keeps things spinning around until the end, and brings about a very tender place to leave his characters.

These books are available at Jackson Street Books and other fine Independent bookstores.

As always, books ordered here will have a freebie publishers Advance Reading Copy included as a thank you to our blogosphere friends.
Posted by Tammy at 11:34 AM No comments: