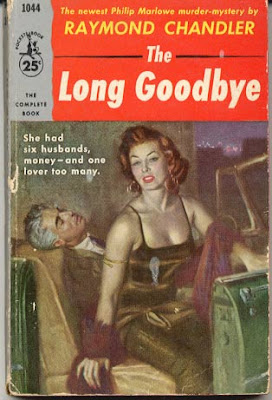 Revisiting The Long Goodbye, Raymond Chandler's penultimate Philip Marlowe novel (pay no attention to the last Marlowe novel, Playback, which isn't very good), is to be reminded of how great an American novelist Chandler was. He transcended genre in perhaps no other way, with perhaps he exceptions of Ray Bradbury and Philip K. Dick. I think The Long Goodbye is his greatest achievement, though there are Chandler enthusiasts who prefer The Big Sleep or Little Sister.

The plot is straight forward enough. PI Philip Marlowe has been aroused late at night by his friend, Terry Lennox, who asks Marlowe to drive him to Tiajuana, as he is in trouble. Marlowe has met and developed a friendship with Lennox over the course of several months, during which he has learned that Terry is alcoholic, war-scarred and prematurely white-haired, and married to a rich young woman. Or recently re-married to her. Marlowe take Lennox to Mexico, and upon his return, is taken into custody by the LAPD for criminal assistance. Marlowe refuses to divulge anything to the police and is only released after Lennox's confession to his wife's murder and subsequent suicide emerge. Marlowe resumes his life and is asked by a New York publisher to help one of their best-selling novelists escape from a self-inflicted and alcoholic-induced writers block. The writer is Roger Wade, and he, too, is married to a beautiful woman, Eileen. The two cases do not seem related at first, but, as these things go, they are.

But more than a plot with twists and turns (I think of the famous story of William Faulkner trying to write the screenplay to The Big Sleep and calling Chandler in the middle of the night to find out who has killed a certain character, and Chandler not knowing; but they were boozehounds, so who knows?), Chandler was as good a prose stylist as there was in 20th Century America. To wit:

From now on I wouldn't tell you the time by the clock on your wall.

Next morning I got up late on account of the big fee I had earned the night before. I drank an extra cup of coffee, smoked an extra cigarette, ate an extra slice of Canadian bacon, and for the three hundredeth time I swore I would never again use an electric razor. That made the day normal.

I was as hollow and empty as the spaces between the stars.

Chandler is also critical of the Hollywood milieu, and the rich as well. There's no sneaking admiration as a F. Scott Fitzgerald might have fawned (the rich being different than you and me, but they have great, lavish parties). They are no different than the mobsters who dog Marlowe and warn him off the Lennox case. In fact, both the rich and the gangsters are quick to remind Marliowe of how much clout they can and do exercise. But more than this, The Long Goodbye is a mediation on friendship: how far does it extend, what can we be reasonably expected to do, and what can we do when that friendship is abused and betrayed. The Long Goodbye belongs on the same bookshelf as anything by Hemingway, Steinbeck or Faulkner. If you haven't read Chandler, do so.

Which brings me to the film adaptation of the book, released in 1973, and directed by Robert Altman from a screenplay by the science fiction writer Leigh Brackett, who also worked on the films of The Big Sleep and The Empire Strikes Back. Ask any Chandler enthusiast how they liked the movie and almost to a person, it is loathed. I'm not sure why. The movie deviates from the story in places, especially in the ending, but the main themes remain. And it is as well done as anything Altman ever directed. The social satire remains. Only it is a Philip Marlowe who has been transported to a 1970's LA, and lives in an apartment next to a commune of brownie-eating young women who do their Yoga exercises on the porch only partially clothed. Marlowe still drives a '48 Lincoln, but he tries to adapt. "It's all right by me", he keeps telling everyone he encounters. Only it isn't ok and his dislocation is such that, while he does try to help his friend, it seems the only one he can love is his cat. Who abandons him. Beautiful movie, with a great performance by Elliot Gould, Sterling Hayden as the author, Henry Gibson as a quack head-shrinker and ex-baseball pitcher, Jim Bouton as Terry Lennox. And, oh, it has one of the most shocking scenes in cinema history, featuring director Mark Rydell as a gangster dogging Marlowe.

The Long Goodbye is still in print from Vintage Books ($14.95) and available from Jackson Street Books and other fine Independent bookstores.

As always, books ordered here will have a freebie publishers Advance Reading Copy included as a thank you to our blogosphere friends.
Posted by SeattleDan at 12:00 AM No comments: