Department of Book Reports: The Man Who Never Died 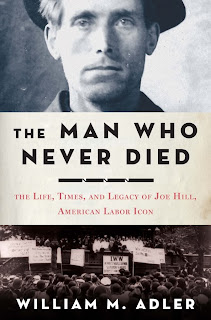 Happy Labor Day to all the "parlor radicals", leftists, anarchists, unionists, Socialists, nihilists, ordinary "wage slaves", bums and hoboes out there! Here's the perfect book, a new biography of Joe Hill, songwriter of the IWW, the Wobblies. The Man Who Never Died, The Life, Times and Legacy of Joe Hill, American Labor Icon by William M. Adler (Bloomsbury, $30.00) Adler has spent 5 years researching this and his painstaking attention to detail bring out new evidence of Hill's innocence in the murder case he was accused, tried and executed for.

Joel Hagglund's childhood in Sweden was during a time of political and social upheaval of Sweden from the Theocratic government into a socialist democratic society. (It is important to note that his mothers birth certificate was labeled "oakta", or "whore's child" and his grandmother had been marked as "slampa", or slut.) He came from a very musical family, singing in their Church choir and learning piano at an early age. After the death of his mother, the siblings went various ways. Joel and his brother Paul had caught "America Fever", they immigrated to America in 1902, where Joel assumed the New World name of Joe Hillstrom, which was later shortened to Joe Hill. Joe's early life was itinerant, traveling across the new country from job to job, until he found the Industrial Workers of the World in the labor camps of the West. Hill was in San Francisco during the great earthquake and his account was printed in his hometown newspaper in Sweden. After being pressed into service as a fireman, he then traveled by rail to Portland Oregon, where he worked as a longshoreman and was recruited into the Wobblie movement and participated in a 40 day mill strike. This was to be the first of many strikes and labor organizing efforts he participated in, including the Mexican Revolution. Adler has done an amazing job of laying out the history and background of each of these momentous battles, showing all the players and their own particular self-interests. From Los Angeles Times owner Harrison Gray Otis and his Baja empire to Utah Governor William Spry who would ultimately ignore Woodrow Wilson's request for a stay to allow the Swedish ambassador to review the case.

The IWW ignited his sense of social justice and equality and his songs gave voice to those beliefs and a voice to the workers. His songs were parodied gospels, rewritten hymns that the Salvation Army (or, the Starvation Army as Hill would call them) used to drown out the worker's protests. As he explained in a letter from jail:

"A pamphlet, no matter how good, is never read more than once, but a song is learned by heart and repeated over and over; and I maintain that if a person can put a few cold, common sense facts into a song, and dress them... up in a cloak of humor to take the dryness off them, he will succeed in reaching a great number of workers who are too unintelligent or too indifferent to read a pamphlet or an editorial in economic science."

Hill was accused of attempting to rob and then killing Salt Lake City shopkeep John G Morrison and his 17 year old son January 10th, 1914. Ignoring evidence of other suspects, the legal system was as determined to convict Joe Hill as he was adamant of not providing himself an alibi. Adler gives us three possible reasons, his conviction of his presumption of innocence, his romantic devotion to Hilda Erickson (given the history of how women in his own family were labeled), and his need to shoulder the expectations of the labor movement. Hilda Erickson was the girlfriend of Hill's long-time friend Otto Appelquist, they had argued over her that January night and Otto had shot Hill in the shoulder. Hill refused to explain this to the court and maintained his demands for a new trial after being sentenced to death by firing squad.

And here is the heart of this book. Bill Adler's research led him to Hilda Erickson's daughter, who had in her attic old letters of Hilda's, including one from 1949 in which she explains the incident to an earlier biographer. Why she never came forward at the time of the trial is still unknown. 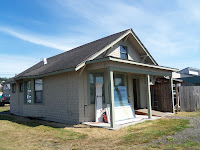 One particular detail that I found delightful, Hilda Erickson moved to Aberdeen, WA after Joe Hill's execution. Bill told me that there was a plaque to her located at 1620 Simpson, but the house address is used as storage for the Aro Glass Company and I was unable to find it. This definitely calls for more research!

This is a particularly resonant book for our times. That this Labor Day weekend a columnist would opine that "Registering the poor to vote is like handing out burglary tools to criminals" tells me it's time to get out the Little Red Song Book and raise your voice:

While we would love you to buy the book from us, if you are near any of the cities Bill will be speaking at, I urge you to attend an event. There will be singing.

As progressive booksellers, we are all for a day off for working stiffs & bindle-bums. It's not a 3 day off weekend for us. But then again, there never really is a 3 day weekend when you have to run the joint. Robert Gray had a very thoughtful meditation on
Bookselling Is Harder than It Looks

They say it all the time. Right this minute, somewhere in the world, a customer is waiting at the POS counter, chatting with a bookseller while purchases are rung up, appropriate currency exchanged and selections bagged (or not, depending upon local custom and environmental awareness). They may be talking about one of the chosen titles or the weather, favorite authors or town politics. But sooner or later the customer will be compelled by some mysterious cosmic force to embark on the requisite traditional litany.

"It must be so wonderful to be surrounded by books all day," he or she will say. "You have the best job in the world. I've always wanted to work in a bookstore."

Of course you do, dear.

Part of the magic and mystery of bookselling is never letting customers see below the surface. Who wants to look at a duck's feet when they can just watch the tranquil pond? The other part is that you wouldn't have it any other way because, for the lucky ones, bookselling is a vocation as much as a job. You could have done something else and certainly made more money. You chose this profession. If you're one of the best, it also chose you.

For Dan & I.. there really was no choice. We sell books. We'll be here all weekend. Try the veal & tip your waitress. We will be closed Monday.
Posted by Tammy at 11:05 PM 4 comments: