Department of Book Reports: A Better View of Paradise

Here's some more Hawaii! A Better View of Paradise by Randy Sue Coburn (Ballentine Books, $25.00) 36 year old landscape architect Stevie, has just completed a park in Chicago, but a broken pump has flooded the fountain and grounds and critics are ruthless in their reviews of the design. On the heels of this career set-back, her boyfriend dumps her and she decides a return to her childhood home on Kaua'i will put her back in tune with the nature she brings to her garden designs. Facing her argumentative father is the part she dreads, but learning he is dying forces Stevie to come to an understanding of her relationship with him and her stiff upper lip British mother. Family secrets are revealed and Stevie learns much as she finds a new life for herself among the natural splendor that is Hawaii.

If you can't get away for a vacation this summer, this is a book to make you feel you have spent the day at the beach. The legends of the islands are vividly drawn on here.

A Better View of Paradise is available at Jackson Street Books. The book's release date is Bastille Day, which coincidentally is Stevie's birthday. This fact tickles me to no end. 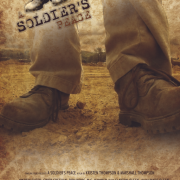 I'd like to invite everyone to attend the movie, A Soldier's Peace, tonight in Second Life. You can read much more about it in Progressive Witness' dailykos diary.
Netroots Nation in Second Life and Virtually Speaking are very proud to host the SL premiere of Marshall and Kristen Thompson's documentary A Soldier's Peace, the remarkable chronicle of one veteran's 500-mile journey into activism, which follows former Army journalist Marshall Thompson, an Iraq war veteran, as he walks the entire length of his home state of Utah, talking to people along the way about war and peace.

Please join us at Netroots Nation Arena for this simple yet powerful film, followed by an interview with Marshall Thompson.

This promises to be much fun!


And another SL friend, Larkworthy, has made this powerful video: