In the Spring of AD 380, letters are exchanged between two old men, philosophers, one in Athens and the other in Antioch. They squabble over the price of copying and their respective ages. One complains about the aging process while the other brags about his on-going virility. Most importantly, they discuss the existence of a hidden memoir written by the Emperor Julian, their friend, who was killed in 363 while conducting a military campaign in Parthia, modern day Iran.

Gore Vidal's Julian (Vintage $16.00) was first published in 1964, and remains one of the great historical novels. For me, it bears a rereading often as new ideas and details emerge on each reading. The prose is luminous, and the voices of the three narrators, the philosophers Libanius and Priscus, as well as the Emperor Julian, are lively and engaging.

Julian reigned only two years, but the memory of his time remains. He was the nephew of the Emperor Constantine, who built the new Roman capital of Constantinople, as well as adopting Christianity as the preferred state religion. Following the death of Constantine, Julian, reared as Christian, managed to avoid the family fighting among his cousins for the Imperial throne. He fell in love with philosophy, studied in Athens, which he loved, and secretly renounced his Christianity. Ultimately impressed into Imperial duties, first as Caesar in Gaul, where he warred successfully against the threat of the German tribes on the frontier; and then as acclaimed Emperor. As Emperor, he tried much less successfully to reintroduce Paganism to the Empire, resisted at all times by the various Bishops of the Church. Perhaps thinking himself a new Alexander, Julian went on to march against Rome's great Eastern nemesis, Parthia, where he was killed in a skirmish, maybe by a Roman lance.

Gore Vidal is our best historical novelist. Anyone who read his series on American history know how compelling a storyteller he can be. From Burr, to Lincoln, 1876, Empire and Hollywood, he knows (and is related to many) the major actors of the American past. He is one of the last of those great public intellectuals born in the 1920's that included Norman Mailer and is as well-known for his essays on contemporary affairs as well as his novels. He has also written plays like Visit to a Small Planet, as well as mysteries under the name of Edgar Box. In any event, if you enjoy history and historical novels, do yourself a favor and read Julian. Or re-read it.

Julian, and other novels by Gore Vidal, is available at Jackson Street Books and other fine independent bookstores.

We decided to venture out and look for pirates today. We got to see a few, but it was the boats we came to see. 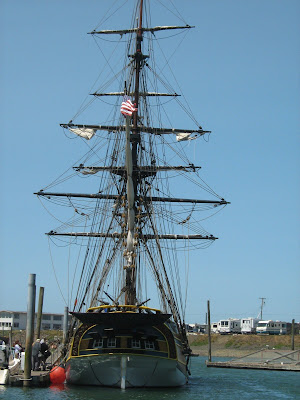 This is the Lady Washington, originally built 20 years ago to illustrate the local history of Gray's Harbor. 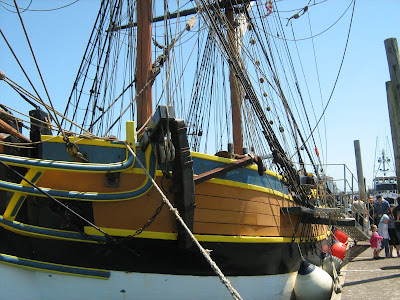 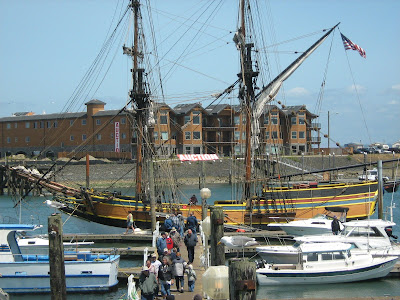 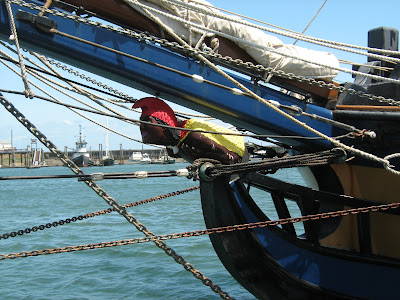 
You can catch the silliness here. I really wanted to see the Pirates Parade, and I did notice the firetruck and another float two blocks away, but I didn't realize we missed the parade. Note to Organizers: if you have a parade; tell people where it is. Oh, and don't leave your floats parked on the street we're not supposed to be looking at. 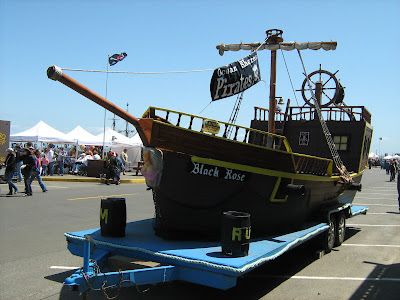 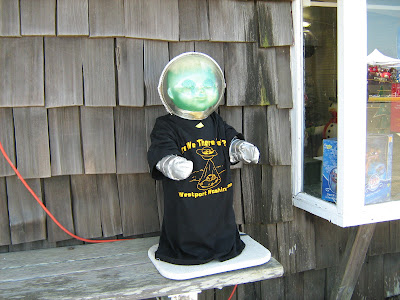 I hadn't realized alien abductions were such a problem in Westport. 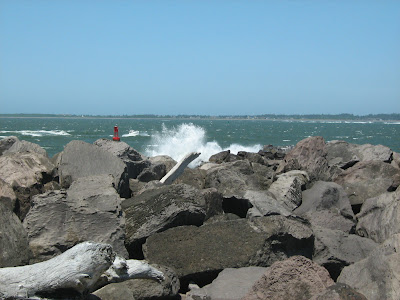 We did go look at the ocean! We waved at RevPaperboy!
Posted by Tammy at 10:21 PM 5 comments: