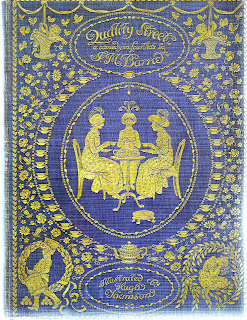 Quality Street: a comedy in 4 acts, by J. M. Barrie, Illustrated by Hugh Thomson (Hodder & Stoughton 1901) Here's a lovely volume from the 42 Cartons I wrote about last week. Id like to talk about why markings in a book (usually markings of any sort mean the value of the book is dramatically reduced) can actually be a fascinating aspect. This would be a valuable volume without these defects, but I'll try to show you why I think these are quite charming defects.

The text block is tight, and the boards are not separated from the body of the book. The illustrated endpapers show little browning.
Over all, the book does have a few problems, the main being that the text has numerous cross-outs and both pencil and ink notations heavily throughout. The half title page tells us the original owners name was June Moore. A taped in newspaper clipping has browned the paper due to pH issues over the years. The very final page has a rectangle cut out of the top outer corner. 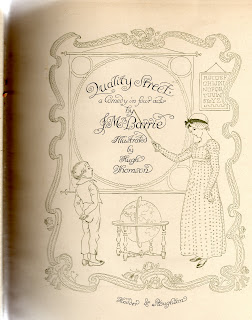 Here's the title page to give you an idea of the Thomson drawings. 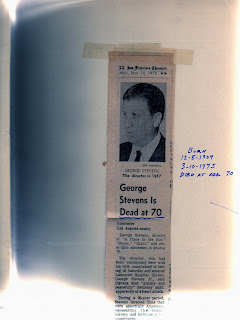 Here is the newspaper clipping, which is the San Francisco Chronicle's Mon, Mar 10th obituary for George Stevens, the director & producer of many Hal Roach & RKO movies, including I Remember Mama, Shane, Giant The Diary of Anne Frank and of course, Quality Street. 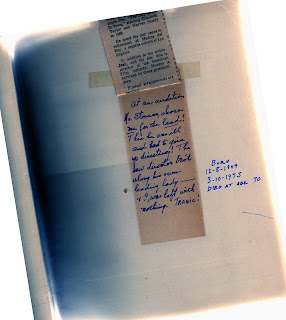 And here we have what I consider the hidden jem of this book:

At an audition
Mr.Stevens, chose
me for the lead!
Then he was ill
and had to give
up directing! The
new director bro't
along his own
leading lady----
& I, was left with
nothing. TRAGIC!

I really can't believe she's referring to the Stevens film of Quality Street, as all movie databases say that Katharine Hepburn begged Stevens to make it as a come-back vehicle for her. The only reference I find to QS from Hepburn herself is on page 201 of her memoir, Me

I had made a string of very dull movies. 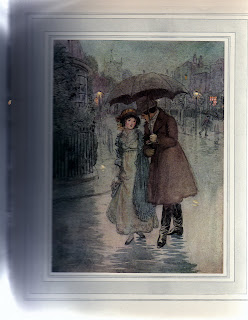 The tipped in plates are lovely and bright with coverlet pages that have a pen & ink drawing and the picture's title printed on them. Some of these sheets are loose, but are all intact. 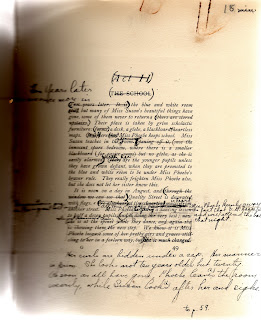 And here is a page typical of the mark-ups and writings. First penciled in, then later finalized in ink, these are the working script notes from Ms. Moore's audition. I've been unable to find exactly which production she was referencing, probably somewhere in California, the family had lived in San Diego & San Francisco. 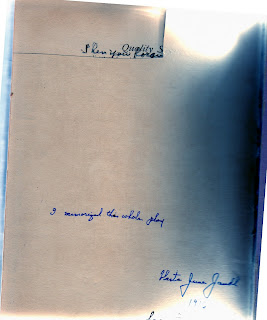 The last page has yet another touching note to the reader:

I memorized this whole play.

Quality Street and many other fine volumes can be found at (Jackson Street) Books on 7th. As always, as a gift to our online pals we'll include a free bonus book from our stash of publisher's Advance Reading Copies.
Posted by Tammy at 8:12 AM No comments: