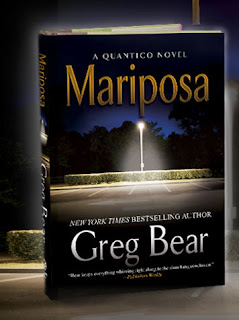 Mariposa, by Greg Bear (Vanguard Press, $25.95)
In a near-future America, teetering on the brink of financial devastation, 3 remaining members of the Turing Seven must infiltrate Axel Prices Talos Corporation. Talos is in the business of out-sourcing its Security Forces (think Blackwater), which now perform operations for all aspects of US government. The Turing Seven are FBI agents who have undergone the experimental Mariposa treatment, gene modification to rid them of their post traumatic stress demons.

Rebecca Rose is called back from her sabbatical to join with Nathaniel Trace to try and rescue Fouad Al-Husam who is undercover in the high security Talos complex in Lion City, Texas. It becomes a race against time as the effects of the Mariposa degeneration begin taking a toll. When the Vice President remorselessly kills his wife, and the President is shot with bullets whose fragments are coated with a delay release poison the timeline shortens to a week.

Filled with lots of high-tech gadgetry, this is a fast paced read that completely draws you in. I was reading this when we went to see the movie Avatar, and that reading gave me many "a-ha!" moments at the technology I saw there. Greg has been a consultant with many government and private organizations from XBox, Microsoft Corporation, the State Department and U.S. Army, Homeland Security, Sandia National Laboratories,to Callison Architecture, Inc. His association with the FBI gave him the idea for this novel and the first in this series, Quantico. If you're a Sci-Fi or Spy Thriller fan who enjoys the tech side of things, these books are for you. There's also a large dollop of politics, and unlike our current world, the bad guys get their due.

I wanted to link to Greg's website, but I keep getting error messages at www.gregbear.com, so here's his publisher site. Greg has won two Hugos and five Nebulas for his fiction. Jackson Street Books has a nice selection of Greg's books, several of which are signed. I suppose this is the proper place for a disclaimer. I was given this novel as an ARC (Advance Reader Copy) at our local trade show last fall, courtesy Vanguard Press and Greg. The fact that I was given a copy had no bearing on whether I would do a book report, I report on books I love and can recommend enthusiastically.