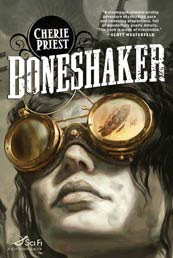 Briar Wilkes Blue's son has gone off into the walled-off Pioneer Square of Seattle, hoping to prove once and for all the innocence of his father. 16 years earlier, prior to Zeke's birth, his father was a brilliant inventor who won a contest from the Russians who are looking for a better way to mine gold out of the frozen land of Alaska. Something went terribly wrong during the first test drive of Dr. Blue's Incredible Bone-Shaking Drill Engine, it veered off course and hit some unknown vein of poisonous gas releasing the heavy yellow Blight gas into downtown Seattle. "Banker's Row" on Second Avenue has collapsed into its basements and gold and currency are missing from the vaults. Dr. Leviticus Blue has vanished and his widow claims no knowledge of his where-abouts. Was Dr. Blue the villain, or a mis-understood genius? And what of Maynard Wilkes, Briar's father whose last act was to release the prisoners held in Seattle's impromptu jail before they could be blighted into Zombies from the gas? His bravery is honored by the remaining residents of Seattle, but despised by the settlers outside the wall.

A wall has been erected, 200 feet tall and 18 feet thick around the waterfront area and only air pilots are able to get anywhere near the toxic city. Left inside are an assortment of Zombies and Doornails. The Zombies are hungry because food has been short for 16 years, and the Doornails (townspeople who did not leave and are not yet Zombies, but are "dead to the rest of the world") try to eke out a living in the Underground catacombs. Briar Wilkes must navigate this dangerous zone and the evil Dr. Minnerricht (who may or may not be Leviticus Blue) and bring her boy out alive.

This Steampunk alternate history is a real "rip-snorter" of a read. Some bits of Seattle's history have been moved around a bit to accommodate the storyline, but you'll be too busy dodging Zombies, criminal overlords and pirate zeppelin Captains to notice. This is a novel that buckles every swash and you'll love every moment.
Cherie Priest just won the Northwest Booksellers Award last week and it's well deserved.

Special H/T to Zathras Afarensis for his hearty recommendation of this book. We're hoping Cherie can join us in Second Life in February, stay tuned.

Boneshaker is available at Jackson Street Books and every order will include a freebie "ARC" surprise.

On Sunday afternoon I will be interviewed on Off The Shelf, a production of Bookstacks in Second Life. We'll be talking about the SLJackson Street Bookstore. You can listen live here, or attend yourself at 1pm, SLT.
Codpast is up now