Department of Book Reports: I'll Never Get Out of this World Alive 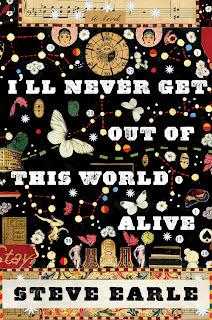 I thoroughly enjoyed Singer/Songwriter Steve Earle's first novel, the recently published I'll Never Get Out of This World Alive (Houghton Mifflin $26.00), It is 1963 and Doc Ebersole has his problems. Doc has a twice-a-day heroin habit; he lives in the red-light district of San Antonio, where he performs illegal abortions, and patches up the occasional knife or gun wound, as he has lost his license to practice medicine; and he is haunted by the ghost of country legend Hank Williams, to whom it is rumored that Doc delivered the fatal morphine shot. Doc spends his days 'straight', haggling with his dope dealer, Manny, having conversations with Hank's ghost, and drinking at the bar next door to his rooming house. A young Mexican woman, Graciela, is brought to him one day in need of his services; she's been knocked up by a sweet-talking Mexican-American who needs no further use of her. Doc performs the abortion, almost losing his patient to bleeding; but Graciela recovers and never leaves. Doc takes a shining to the girl. They go to see JFK's arrival in San Antonio and before the President's fateful trip to Dallas, where the girl, who very much wants to see 'Yackie', sustains a wound to her wrist, that never seems to heal. But she herself has her own gifts of healing others. Her presence turns Doc's life around, as well as Hank's ghost, as he strongly disapproves of her preoccupying Doc's time.

Earle, as you'd think, has a gift of straight forward narrative and storytelling. The dialogue is natural and his characterizations are true and empathetic. I'm certain that in his portrayal of Doc's habit, Earle drew on his own personal experience of using. Outside of William Burroughs' novel of addiction, Junky, it is the most vivid description of a lifestyle and evocation of desperation I've read. The book begins:
"Doc woke up sick, every cell in his body screaming for morphine- head pounding- eyes, nose, and throat burning. His back and legs ached deep down inside and when he tried to sit up he immediately doubled over, racked with abdominal cramps. He barely managed to make it to the toliet down the hall before his guts turned inside out.
Just like every day. Day in, Day out. No pardon, no parole. Until he got a shot of dope in him, it wasn't going to get better...."

The title of the book is from one of the last songs Hank Williams wrote. It was true for Hank, as it is for all of us. Some of us manage to get out in better shape. Some of us can experience the hope that someone like Graciela provides.


I'll Never Get Out of This World Alive is available from Jackson Street Books as well as other fine independent bookstores.
Posted by SeattleDan at 9:38 AM No comments: