Department of Book Reports: Travel the Whole Earth with Charley 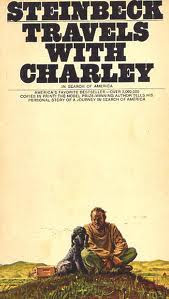 I've always meant to get around to reading Travels with Charley, and this week I jealously clutched a copy before putting it on the shelf. What a delightful road trip!

Mr. Steinbeck & the ever faithful French poodle Charley embark our country's highways in September, 1960 to see the "real America" once more. Between getting lost on the highways, our road warriors eat in diners with identical cellophane wrapped food and occasionally chat with the locals.

"The best way to attract attention, help, and conversation is to be lost. A man who seeing his mother starving to death on a path kicks her in the stomach to clear the way, will cheerfully devote several hours of his time to giving wrong directions to a total stranger who claims to be lost."


The nightly campsites and reminiscence of the locales give this book it's soul. It is a love story to a countryside that no longer exists, but it's so lovely to linger there a while. There are also quite a lot of politics. This was the time of the JFK election and Mr Kruschev banging his shoe. 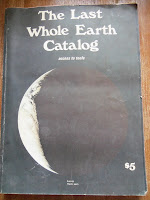 We've gotten in a nice copy of a book I haven't seen in decades- The Whole Earth Catalog! For the younger folks in the audience, this is what we looked at before there were internet tubes. Don't believe me?


"When I was young, there was an amazing publication called The Whole Earth Catalog, which was one of the bibles of my generation. It was created by a fellow named Stewart Brand not far from here in Menlo Park, and he brought it to life with his poetic touch. This was in the late 1960′s, before personal computers and desktop publishing, so it was all made with typewriters, scissors, and polaroid cameras. It was sort of like Google in paperback form, 35 years before Google came along: it was idealistic, and overflowing with neat tools and great notions." ~Steve Jobs 2005 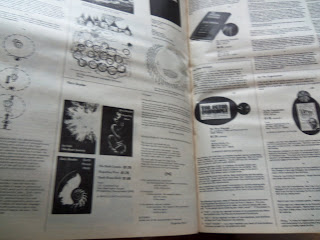 It's delightful to open this to any page. This copy is "The Last" edition printed in 1972, and since it was stored in an attic for many years, it is surprisingly bright newsprint paper not toned by sunlight. The fragile cover does show some wear, but the pages are still bound in a tight, clean text block.
Posted by Tammy at 2:37 PM No comments: