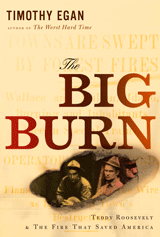 The Big Burn Teddy Roosevelt and The Fire That Saved America by Timothy Egan (Houghton Mifflin, $27) For those of you who enjoyed Ken Burn's National Parks, I suggest this excellent history of how our National Forests came into being. We saw terrible fires in California this past summer, 100,000 acres burned and many houses were lost. This is small in comparison to the fire that swept through the Northwest in 1910, burning 3 million acres in just two days. The town of Wallace, Idaho was completely destroyed. 85 (or perhaps 87) lives were lost. This fire raced across the landscape, pushed by Chinook winds and updrafts the flames created, blasting up to 85 mph. That speed cannot be out run. Trains were unable to carry people to safety as bridges and tracks were destroyed.

Theodore Roosevelt had set aside the National Parks during his presidency, and put Gifford Pinchot in charge of managing these forests. Pinchot, newly graduated from Yale with new theories of Forestry, had amassed his staff of Forest Rangers, or "little G.P.s" as they were known. John Muir had traveled west and sent back reports of Yellowstone and the glorious Sierras. Their conservation ideals were often ridiculed by the hard scrabble homesteaders and Railroad and Lumber Barons of the region. By 1910, Roosevelt was out of office, replaced by his own pick of Taft, whose ineffectiveness was blatant in this disaster. 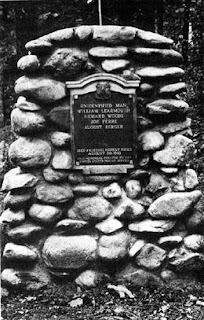 Egan gives a good narrative of how this time period produced the break from Republicans as the Progressive party of Lincoln and Roosevelt to what we know today. The scope of the burn also allowed him to push his Conservation goals and add to the Parks with the National Forest lands. Much of the eastern parks owe their existence to this tragedy.

Timothy Egan has written some of the best Western histories including The Good Rain, about this part of western Washington we call home and The Worst Hard Time, about the dust bowl years and the western migration it produced. His research brings out the personal narrative in these histories. In The Big Burn we learn of how after Gifford Pinchot's young wife died after just 2 years of marriage he spent the next 20 years haunted by her presence. His diary notes "days of light" when he believed he had been in her presence, or "dark days" when she did not appear. He sought out seers and seances to call her forth. He was often seen carrying on conversations with her as he dined alone in Washington DC's finest restaurants.
Taft and Roosevelt's lives and presidencies are detailed with personal details and the political aspects of the day. The firefighters are given good tribute here. Drawn from the logging and mining operations and joined by the Buffalo Soldiers, these are the lives that were lost that weekend. The 1,200 firefighters hired by the Forest Service often weren't paid for their time, or medical bills. Ed Pulaski, who herded his men into a cave and pulled his handgun to keep them from running into the inferno, was left destitute after the fire. Denied a patent number, he is remembered today for the axe/blade tool that bears his name and is invaluable to firefighters everywhere.

The Big Burn is available at Jackson Street Books and do check with your local independent booksellers to see if Timothy Egan will be reading. Listen to the audio from a recent radio interview on KUOW's The Conversation (begins at 40 minutes in).

Cross-posted at Jesus' General
Posted by Tammy at 10:42 AM No comments:

Yet another episode of Small Town, Small Minds

Our first example surprised me. This is a living room on a main street in downtown Aberdeen. Market Street, in case you're wondering. I was so shocked, I had to go around the block and come back for a picture. Dan warned me "be careful" as I jumped out of the car and snapped the picture from the sidewalk. I only took the one, I was actually kinda nervous myself. Anyone who would post this sort of ugliness in their front window wasn't anyone I wanted to talk to. I didn't think it'd help if I said I wanted it for my blog. 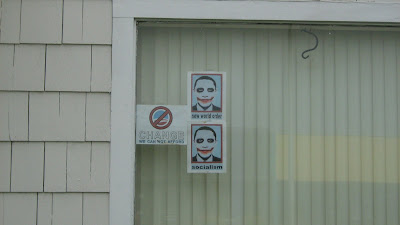 Then we have the Market Place Health Food store that I was so delighted to find right next to Jay's Fruit Stand and Michael's Meats. I always thought it a little odd those two would talk about how their proximity would bring customers to each other, and make no mention of the Health Food store. Maybe now we see why. 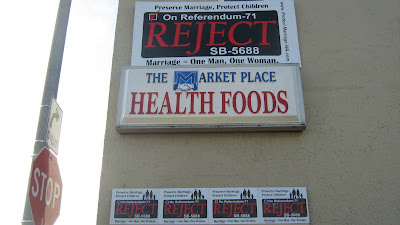 If you are not in WA state, I-71 is an initiative to repeal the modicum gay rights given last year, our "Everything BUT Mariage" act. You actually want to vote "Yes" to keep these rights for our citizens. We both sport APPROVE buttons, via our dear Fran's generosity and activism.

Here's a local um.. brilliant mind.. proffering her two bits on how to vote on I-71:

Preserve marriage as one man, one woman

Under our Bill of Rights, all American citizens have equal rights. Gay people can already choose civil unions. They can arrange legal matters such as insurance and wills.

Senate Bill 5688 is about granting special rights to homosexuals and unmarried seniors.

If we allow SB 5688 to pass, society is one huge step closer to redefining marriage into oblivion as anything and everything.

Legal arguments are already being made that if gay people can marry, why not multiple partners, why not men and young boys, why not polygamy. People supporting 5688 say this is not what they want, but activists have claimed that passing 5688 is just one of the incremental steps ( to approve gay marriage in the U.S. and redefine marriage as a whole).

Traditional marriage, as imperfect as it is, still exists to protect women and children and to perpetuate our society. Please resist arguments to dilute it further. Please stand against Washington Senate Bill 5688.

Please help preserve marriage as between only one man and one woman. Protect our children by protecting marriage. Please vote NO on SB 5688.

You just keep telling it like it is, Jill. Stay on point there, dear. And, don't bother mentioning what folks can actually vote on.
Posted by Tammy at 9:41 PM 3 comments: