The Price Of Right

I got an email earlier this week, asking about Second Life. Someone who reads my Book Reports at the General's, wanted to come over to Cafe Wellstone for our clandestine meetings. Turns out, she's one of the folks the General met last week while trying to separate Church and State. And she's written a book!

The Price Of Right (Sterling & Ross Publishers, $14.95) From the publisher's catalog "Conservatism has run America into the ground, and it always will. How can it not? It's a governing philosophy based on myth, used to concentrate power in the hands of the few to the detriment of the many- exactly the opposite of what was intended by the founding fathers."
Here's one reviewer: "Morgan does a terrific job of fitting the pieces together and painting a picture that has the potential to reach a lot of people. This is a book that might open some eyes. I recommend reading it and then giving it to a Republican."
and here's another review from Journeys with Jood.

I'm so tickled to have met Idella (Alicia)! We're going to have a book signing in Second Life at Virtual Jackson Street Books, next Saturday at 2pm SLT (that's Pacific Time on your planet). I'll be sending copies of The Price Of Right to Idella for signature, and then she'll forward them to the correct homes. Let me know if you'd like a copy of your very own and we'll get all the arrangements made.

Idella blogs over at Last Left Turn Before Hooterville. It was there I found out she sang on Neil Young's Living With War album. How cool is that? You can find her wicked cartoons here.

I'll be spiffing up the bookstore and getting it ready for Saturday. Email me if you want to try Second Life and I'll help you get started.
Posted by Tammy at 5:21 PM 1 comment:

Discovered while tromping around the wilds of Hoquiam. These specimens were spotted at the remote reaches of a parking strip, between the Swanson's grocery and the police station. 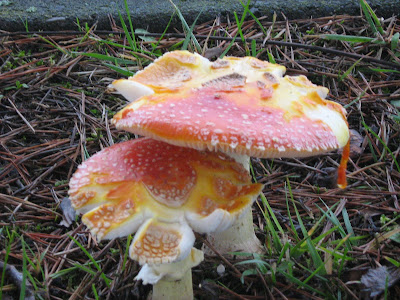 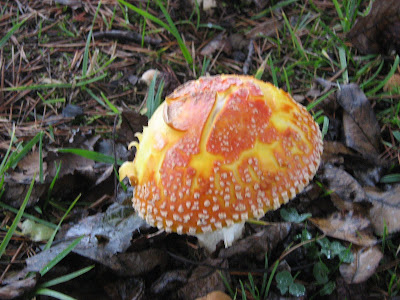 Since I can't unpack boxes of books yet, I can't look up my NA Mushroom guide. And a google search got me pretty pictures, but not identification. 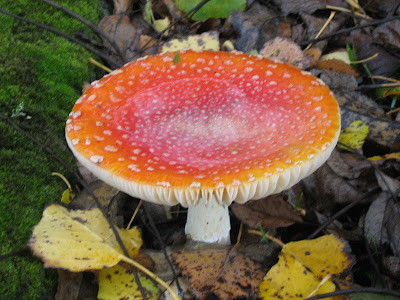 This last one has a reflection of the clouds in the pool of water.
Posted by Tammy at 11:21 AM 8 comments:

From Irving Berlin's Call Me Madam, a pleasant musical interlude between Ethel Merman and Donald O'Connor:

This is the song that drove home to me Berlin's propensity for composing on the black keys. A lovely duet.
Posted by SeattleDan at 11:17 PM 2 comments: