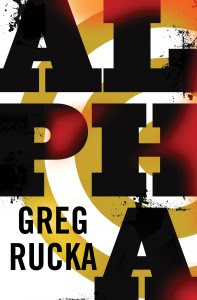 Alpha by Greg Rucka (Mulholland Books, $24.99) Alpha is the first of a projected trilogy by the incredibly talented Greg Rucka. Here we meet Jad Bell, retired Delta Force operator, Master Sergeant now returned from the Middle East and divorced, has taken a high level security job at the world's largest theme park, WilsonVille. A Russian sleeper agent has taken a job at the park and his team has released a deadly botulinum toxin into the park and threaten their hostages with a dirty bomb. Of course, in a world crafted by Greg, there will be more, much more.


This past week Greg wrote about his research and sets the record straight about 10 amusement park disasters at HuffPo.


Rucka's novels are always dense and tightly packed with action. If you like a fast paced thriller these are just the books for you. If you prefer strong characters and believable plot lines, you won't be disappointed.

One thing I heard at each and every autographing was


Q: How do you write such strong/well-realized/positively portrayed women?

I first found Greg's books when I worked at the Mystery Shop, someone had traded in the first 2 books and I needed something to read at lunch. I started Keeper and at the end of my lunch came out and grabbed the copy of Finder, and said these are mine, I want them both! I was immediately hooked.

Keeper is set in Portland OR, at a Women's Health Clinic which has been bombed. After having read some other authors use the issue of abortion as an exploitation to justify violence and male privilege, I was stunned at the depth and perception of a male writer speaking to women's issues with such compassion. Here at last was a guy who got it, the threats, the soul searching decisions and most importantly, the choice.

The Atticus & Brigit series are highly recommended as are all of Greg's work. I'd really compare his work to Dennis Lehane for gripping storylines and fully realized characters.

When I first brought home these novels, my son saw the author and said "oh, yeah, Rucka. I like his comics." Huh?? Turns out, he's a pretty big deal in the Comic Universe too.

Alpha is available at (Jackson Street) Books On 7th and fine independent bookstores everywhere.
Posted by Tammy at 7:36 AM 2 comments: