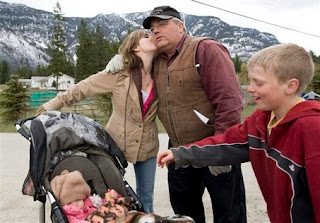 Oh, where do I start?

On Jan. 22, 2009, a case began in Canadian court, in which Canada’s “same-sex marriage” law is being used to justify polygamy. Defense lawyers for two men, charged with marriage to twenty women, and two women, respectively, utilize the argument: if gay marriage is legal, why not polygamy.
After polygamy, we can expect multi-partner, man/boy, woman/boy, man/very young girl, etc. Now we see the future reality emerging: the way to abolish marriage is to redefine it out of existence. If everything can be marriage, pretty soon nothing will (need to) be marriage.

--snip--
(Ed note: I was trying to cut her short(er), but this next paragraph is so damned funny:)

The advance of society is dependent upon future generations. Children need protection from exploitation, from irresponsible choices, forced or arranged marriage, by incestuous relationships or by predators who may be allowed their freedom to express their (perverse) preferences. How do we accomplish this without laws preserving the family and marriage? We must preserve social mores.

Legalized gay marriage is now a legal stepping stone. Let us sidestep it in the first place.

If marriage and laws to regulate marriage are abolished, what follows would be skyrocketing social problems. Look for increased genetic pool corruption, sexually transmitted disease, crimes of passion related to jealousy, abuse, rage, and further exploitations.

Is this what she's on about?

Jill Lagergren, resident of 91 Porter Creek Road West, Elma, Washington, discussed the
vote-by-mail proposal. She reported that she has been involved in the election progress
as an observer for the 2004 election. Ms. Lagergren expressed concern regarding the
registration process for VBM. She requested that the Board of Commissioners carefully
consider the VBM proposal. Ms. Lagergren recommended that in order to insure greater
accuracy the County reduce mail voting to a minimum instead of expanding it.

Gosh! Vote By Mail Worked! Who woulda thunk it?
Jill luvs her some Rossi!

I guess the best reason we need to go to council/civic imput meetings is to shout down the Jills. 685 people decided the Vote By Mail resolution, and Jill was a constant shrill.
Posted by Tammy at 10:53 PM 6 comments: