department of Book Reports: Nobody Move 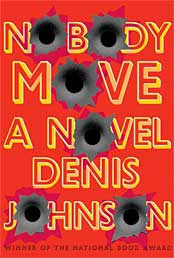 It's no secret that I love the writing of Denis Johnson. I reported on Tree of Smoke, the National Book Award winner here. It is the long, ambitious story of American involvement in Southeast Asia as done by a sort of post-modern Graham Greene. Not nearly as long, and not quite as ambitious, nevertheless, Denis Johnson's new novel Nobody Move (Farrar Straus Giroux $23.00) is a finely written caper novel that has its own fascinating passages.

Originally serialized in Playboy magazine, the plot is fairly straight forward. Jimmy Luntz has just finished participating in a barbershop singing contest when he is picked up by a shady character called Gambol. It seems Jimmy has many gambling debts, and Gambol's boss, Juarez, has a taste for eating late-payers testicles. Luntz is able to escape from his captor and hooks up with a woman, Anita Desilvera, who has her own set of problems. The chase ensues and there is plenty of guaranteed mayhem, as Gambol, Juarez and "The Tall Man" pursue Jimmy.

The dialogue is smart and quick. Here's Luntz talking to a young woman at a mini-mart:

"Are you walking?"
Luntz said, "I guess I'll hitchhike"
"You better clean up first."
"Yeah, where's the washroom?"
She shook her head. "The whole back of your pants is like you been rolling in dirt. You better find some deep water."
"Where's the river?
"Right over there a half mile."
"Is it cold?"
"It's cold. But it wont kill you".

I should mention the jacket art, which is reminiscent of Chip Kidd. Susan Mitchell's jacket design of bullet holes with board illustrations by Philip Earl Pascuzzo are a great update of paperback pulp art from the forties and fifties.

Nobody Move is available at Jackson Street Books and other fine independent bookstores.

When Hollywood comes calling, I'm sure democommie will be up for the part of Luntz.

I have a special offer for orders placed here: enter the code FOG (stands for Friends Of the General) in the ask the bookseller a question tab, and I'll include a free Advance Reading Copy of something delightful.
Posted by SeattleDan at 12:09 AM 48 comments: