I conquered the Kitchener Stitch by doing it backwards 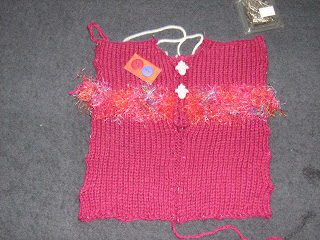 There's a new baby I'm knitting for. Her name is Kai. I need some advice on buttons. Please vote in comments. Or, mail me two or three cool buttons. Thnx!

OMG! This is going to be good!

thanks Shini!
Posted by Tammy at 5:21 PM No comments: 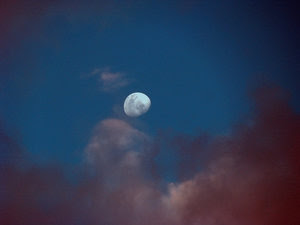 Caught out in daylight, a rabbit’s
transparent pallor, the moon
is paired with a cloud of equal weight:
the heavenly congruence startles.

For what is the moon, that it haunts us,
this impudent companion immigrated
from the system’s less fortunate margins,
the realm of dust collected in orbs?

We grow up as children with it, a nursemaid
of a bonneted sort, round-faced and kind,
not burning too close like parents, or too far
to spare even a glance, like movie stars.

No star but in the zodiac of stars,
a stranger there, too big, it begs for love
(the man in it) and yet is diaphanous,
its thereness as mysterious as ours.