Department of Book Reports: Ted Williams: The Biography of an American Hero 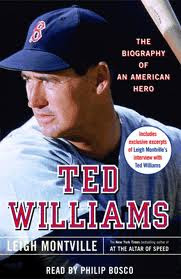 Continuing in our biography binge, and with the playoffs being played and the World Series looming, I thought I'd look at Leigh Montville's Ted Williams: The Biography of an American Hero (Broadway Books $18.00), a book published originally in 2004. It is a fascinating book about a fascinating man.

Williams grew up in San Diego, the son of an unhappily married couple. His mother was a Mexican-American, who devoted her life to the Salvation Army and pretty much neglected both Ted and his brother, Danny. His father seemed to be mostly a non-presence in their lives. Ted early on, with some adult mentors, focussed his life on baseball and especially hitting a baseball. (Danny ended up a ne'er-do-well, whose life was tragic.) Ted seemed to miss getting much in the way of social graces, and throughout his life was loud, brash, and supremely confident in his abilities, whether it was in baseball, or hunting and fishing which he also excelled at. His cockiness probably cost him an extra year in the minor leagues, as the Red Sox management felt he need a year to mature.

Williams won the Triple Crown twice (leading the league in batting average, home runs and runs batted in), but his most famous season in 1941, when he hit .406, the last time any major league player has hit over .400 for the season. It was the year before the United States entered the Second World War; it was also the year that Joe DiMaggio had his 56 game hitting streak. (The naturalist Stephen Jay Gould wrote an essay some years back on why no one will ever have a .400 season again; it's likely no one will soon break the Joltin' Joe's record either). Montville has a nice little riff, paraphrasing Robert Creamer, on DiMaggio and Williams. DiMaggio was champagne; Williams was beer; Joe was the New Yorker; Ted was Field and Stream.

Ted was politically conservative, but his life belied whatever political stances he took. He was generous to a fault, especially with children and the Jimmy Fund in Boston was special to him. He was also a soft touch and aghast whenever confronted by abject poverty. And he was one of the primary movers in getting Organized Baseball to take note of the Negro Leagues and the many stars it had. He took the occasion of his induction into Baseball's Hall of Fame to say: "I've been a very lucky guy to have worn a baseball uniform, and I hope some day the names of Satchel Paige and Josh Gibson in some way can be added as a symbol of the great Negro players who are not here only because they weren't given a chance."

Williams later managed the Washington Senators and then the Texas Rangers, the first year the franchise was shifted. His later years were complicated by his relationship with his only son, John Henry, who had problems with money. Montville writes with great authority and easy style and without academic pedantry, that makes the book accessible to all, even those with little interest in baseball. I'm sorry it took me so long to get to this book, but I'm glad I have. The book is available from Jackson Street Books and other fine independent bookstores. Enjoy.
Posted by SeattleDan at 9:18 AM 2 comments: