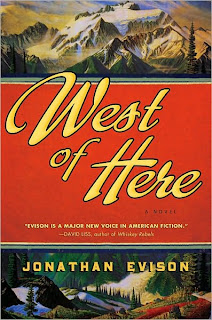 Jonathan Evison's West of Here (Algonquin Books of Chapel Hill $24.95) is a masterwork by a fine young novelist. The novel is, by turns, an epic, a saga, a book full of characters who live and dream big things. And it is, as we booksellers like to call it, a page-turner. Interruptions during reading aren't happy ones. 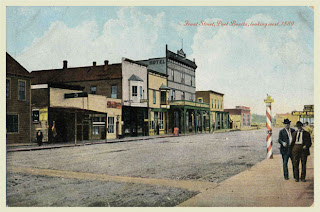 The story revolves around the town of Point Bonita (a fictionalized Port Angeles), located atop the north end of the Olympic Peninsula in Washington state. Evison weaves two time periods together; the Point Bonita of the early 1890's, just before the territory becomes a state, with the hopes to become the jewel of the place as Seattle, PB's rival, has just burned to the ground; and the more contemporary period of 2006, when it has become a town in which Wal-Mart dominates the economy of a city down on its luck. The earlier version of the town has dreamers. Ethan Thornburgh sees the possibilities of damming the Elwah River, providing electricity; Ex-Indian fighter and explorer, James Mather, wants to explore the deep interior of the peninsula, that last wilderness left unexplored in the continental U.S.; Eva Lambert wants to explore the world of the possible for a woman and joins the Utopian community located nearby. But the people of modern Port Bonita also dream, even as the town slowly dies and the Dam is due for destruction. Some search for Sasquatch, others dream of being left alone. 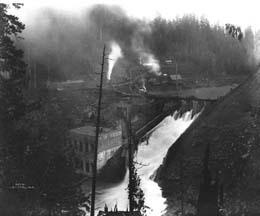 Port Bonita, of course, is a character, probably the main protagonist here. But the characters, and there are many in this 483 page epic, all of whom Evison richly imagines, from the only African-American living within miles of the place who is the parole officer to the Indians who inhabit the fringes of both the town yesterday and today,as well as the prostitues who can think bigger thoughts beyond life in a whorehouse. We learn their hopes and disappointments, all limited by their geography and their dreams, but for whom the place is one of adventure of some scale, whether large or small.

The town of the late 19th century reminded me of another book I reported on a few years back, Heyday, as well as the HBO series Deadwood, albeit without the gunfights. Heyday, though set fifty years earlier, describes a frontier where anything is possible, where perhaps Utopian visions can be made true, or personal fortunes can be made, whether in 1849 California or the South Dakota mud-filled streets of Deadwood where Wild Bill Hickok and Calamity Jane walk. That same spirit inhabits the characters of West of Here as well, having finally moved to one of the last places where one can achieve these things. Dream big, have hope, let nothing stop you.

I really cant recommend this book enough. It will be a treat for your hopes, your dreams and your imagination as well. Incidentally, it would make fine reading for Book Clubs. West of Here is available at (Jackson Street) Books On 7th and other fine independent bookstores. In the meantime, enjoy this interview of Evison by everyone's favorite librarian, Nancy Pearl.
Seattle Channel Video can be played in Flash Player 9 and up

The publishing newsletter Shelf Awareness has a Dedicated Issue for West of Here, here. If you'd like to help protect this amazing corner of Washington, please consider signing the Wild Olympics petition.
Posted by SeattleDan at 9:04 AM 2 comments: