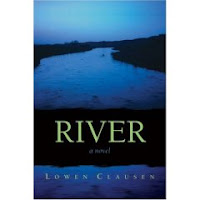 My Booksense Blurb will be published in the January Picks Newsletter! Here's the full length version:
River, by Lowen Clausen (Silo Press, $15.95)
Lowen Clausen has written an exquisitely heart-breaking novel, with a soul as big as the eponymous River.
After the death of his son, a father takes the river voyage he has always dreamed of. Starting out from his family farm on the headwaters in the Sandhills of Nebraska, his inner voyage takes him to new acceptance of the son he never said goodbye to in life, while he faces the solitude and challenges of the river itself. The land plays as large a part of the story as do the people on the river.
This elegiac story will resonate with everyone who takes its journey for a long time.
-Tammy Domike, Jackson Street Books 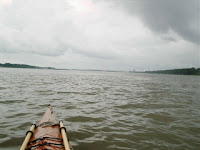 This isn't the first time I've gotten my rec printed (Opal, A Fistful of Rain), but it's especially sweet as this is the second one I've gotten for Lowen. Way back when, we got a free copy of a new book by a first time author. We usually approach these offerings with trepidation, but this one was set in Seattle in 1980, (just when I got here!) along First Avenue's strip joints. I fell in love with the book and have been evangelical for the Seattle Cop Trilogy ever since. I slid a copy to the sales rep of my former employer, and they actually offered Lowen a paperback contract! Sweet! That's the only time I've ever managed to get that kind of magic to work. 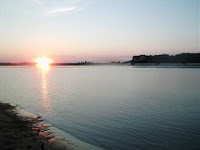 Or, maybe not. Lowen wisely kept control of the Hardcover rights, and produced beautiful elegant volumes and then, later, a box to hold them. The publisher, not so much. Stereotypical cop/thriller cover art that told you nothing of what was inside. And, they had a habit of letting them go out of print, most notably, Second Watch, just 2 months before the release of Third and Forever. And still, publishers wonder why back list doesn't sell. Hint: keep it in print!

Everything Lowen has done has been a class act.While still a beat cop, he attended writing classes at UW. His dedication to the craft of writing has produced this heart-breaking breath of air. Read this book and then go hug your child. 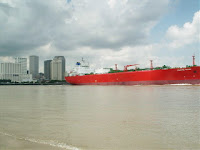 River is a journey once taken by Lowen and his daughter. I was priveleged to be on the list for his weekly e-journals. of that voyage. The pictures here have become scenes in the book. As you read, come back and look at the pictures. 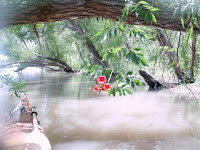 River (and the boxed set!) are available at Jackson Street Books and fine independent bookstores everywhere!
Posted by Tammy at 1:22 AM 1 comment:

Visions of the Shifting Sands of Fate

Our friend Darryl has been doing computer graphs and bar charts! on the various candidates and how they poll currently if the '08 election were held now. Looks good for the Dems. My worry has always been that if Hilary Clinton were the candidate, how "electable" she would be. Doesn't look too bad really. Tammy and I really haven't made up our minds at all, though I guess our preferences would go Kucinch, Dodd, Edwards, Obama, Richardson, and all the rest. I hope that by the time we in Washington State actually caucus, it might mean something. We'll see.
Posted by SeattleDan at 9:59 PM 7 comments:

when she talks about stuff.
Posted by SeattleDan at 12:13 AM 3 comments: 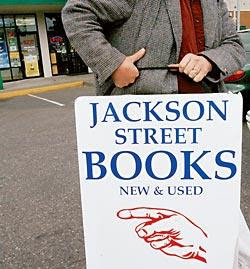 The picture is gone and I can't get it back. Time to start over with a new template? Anyone out there with mac/blogspot techno advise? Please help!