Department of Book Reports: In the Garden of Beasts 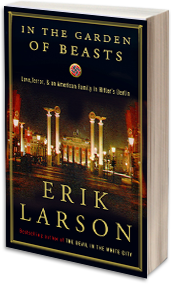 In 1933, freshly inaugurated President Franklin D. Roosevelt named William Dodds Ambassador to Germany. Dodds was not FDR's first choice. Two other men had turned down the post, as Germany seemed to be to embroiled in becoming a fascist state. Nor was Dodds a typical choice. Most Ambassadors were chosen from America's wealthy elites, usually big political donors to the President's Party. FDR's choice was sneered at by many in the State Department. Dodds was unusual in that he was an Academic, the chair of the History Department at the University of Chicago, who had hoped to use his years in Berlin to write his magnum opus, a history of the Ante-Bellum South.

Erik Larson, who I reported on some years ago when his book Thunderstruck was published, has written a fascinating account of Dodds' years as Ambassador in In the Garden of Beasts: Love,Terror, and an American Family in Hitler's Berlin (Crown Books $26.00). He brings to life the years before World War 2, years when Hitler had many admirers in the United States. Dodds brought his family to Berlin with him, and central to the story is his daughter, Martha, a young woman at the time, who proceeded to take on a number of lovers, including many Nazi officials, as she was initially enthralled by the glitz and the parties. But as the family stayed on, and Hitler's intentions to the Jews became more and more apparent, she reeled from those previous affairs, and eventually aided the Soviets in their espionage against the Fascists. (She continued to take on lovers, notably Thomas Wolfe, author of Look Homeward Angel, as well as Carl Sandburg.) Dodds himself continued to warn his superiors at the State of his concerns, to no avail, and he left Berlin in 1937.

One of Larson's greatest skills is that he has a novelist's eye for telling history. He writes lucidly, develops the characters into flesh and blood, and has knack for keeping the narrative flowing. In the Garden of Beasts (the name of the street near the Ambassador's home) is not only popular history at its best, it is also great story telling. The book, of course, is available at Jackson Street Books, as well as other fine independent bookstores.
Posted by SeattleDan at 9:24 AM 1 comment: