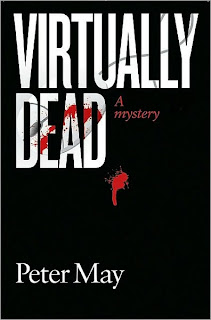 Michael Kapinsky has returned to his old job as a Crime Scene photographer with the LAPD after the death of his wealthy wife, Mora. Unable to come to terms with her loss, he is now being targeted by Mora's first husbands family who want a larger share of the inheritance. The bank has smelled the troubles brewing and foreclosed on his $3 million dollar mortgage.

As he goes through the motions of letting go of the groundskeepers and others, his therapist proposes a unique way to continue his therapy sessions without cost. Join a group session in Second Life. A surprise party thrown by the cops from work in Real Life nicely sets the reader up for more surprises in Second Life. I liked the way Peter kept the tension during Michael's initial dis-orientation in Second Life.

When Michael confides in his co-worker, Janey of his sessions in SL, she invites him to become an investigator at her SL Detective Agency. (Peter actually hung a shingle out in SL himself and ran the Flick Fauld's Detective Agency while researching this novel.) Investigations from RL and SL begin to blur as Michael realizes the hand/eye icon on recent murder victims computer screens is actually the SL logo. Murdered in RL, but also in SL, with the rumored "super gun" which can kill avatars and steal all the Linden dollars in their accounts.

A Second Life glitch has dropped an amount of Lindens that would cash out to over 3 million US into Michael's account and when the bank threatens again, he cashes out and pays off the house note. That triumph is short lived, when it is uncovered that the murdered avatars had been involved in a Mafia plot to launder cash through the Linden banking system.

Michael has to dodge bullets and bad guys in both Second and Real Life, while trying to ensure his friends aren't the ones who wind up dead.

I appreciated that Peter was able to craft an exciting story using the frame of SL, with insight from having experienced the virtual worlds himself. Too many writers have set out to write "about" SL and completely miss the point. I've rarely seen anything rise above the level of FanFic and this is a welcome raising of that bar.

If you'd like to meet Peter May in the pixel, he'll be reading and discussing Virtually Dead at Lacamas Reading Hall at Noon PST/SLT, February 6th. Download the free software and create your avatar. Use the search to find people and send an IM to BookemJackson Streeter and I'll help you find good free stuff to get you started. We're very happy to have welcomed Cricket and Hedera in recent weeks.
Last Sunday's interview at Off the Shelf is posted now. I had great fun chatting with Kghia & Simeon.


Virtually Dead is available at Jackson Street Books, and includes the special offer of a freebie surprise ARC with every order.