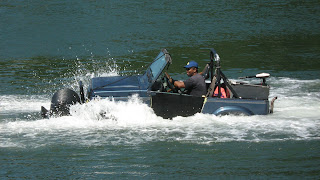 Coming back from the grocery tonight, we saw the most amazing vehicle out in the river. At first I thought someone drove off the bank, but closer inspection showed this was a seaworthy craft. 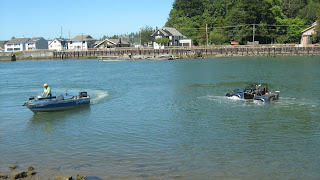 He even got a chuckle out of the local fisherman, while he waited to come ashore. 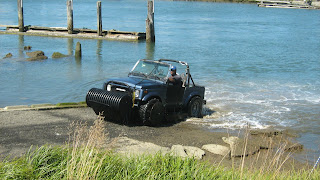 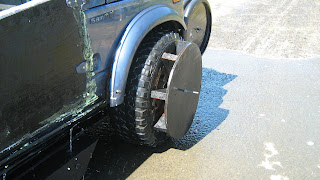 The wheels are outfitted with these paddles for propulsion, although there was a small elvinrude engine on the back end. 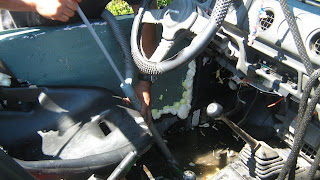 Pumping out the bilge after landing. Most of the water was back splash from the front tires, not leakage. 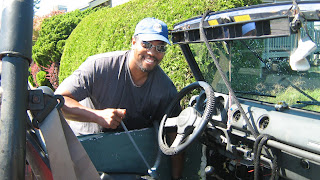 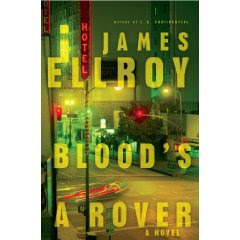 I haven't quite finished the one massive book I'm reading, Blood's A Rover, by James Ellroy (Knopf $28.95) This is prime Ellroy, violent, twisted and so dazzlingly written. It's difficult to say I'm enjoying it, but it's certainly gripping and compelling. This is the third and final volume in Ellroy's Underworld USA Trilogy which began with American Tabloid, then The Cold Six Thousand and the election of JFK, and now we are in the Cold-War years just up to Watergate. There's plenty of hate crimes, racism, conspiracy plots, mafia, drugs and Haitian voodoo. The novel follows the three main characters Wayne Tedrow Jr the ex-Vegas cop from Cold Six Thousand who has gone on a murderous spree (which includes the MLK assasination) after his wife was killed by a black thug and is trying to redeem himself.
Dwight Holly, FBI agent and son of a KKK member whose dirty laundry has obligated him do "Gay Edgar" Hoover's top jobs. Donald Crutchfield is a low life working for Howard Hughes' interests in Haiti and the Dominican Republic.
Woven throughout these three exploits are their love interests and a mysterious woman with a gray streak in her hair.

I don't recommend this one for the faint of heart, but if you're an Ellroy fan this is a great read. Not as fast paced as the previous, it still has his trademark style using journal excepts, redacted FBI files and secret notes. 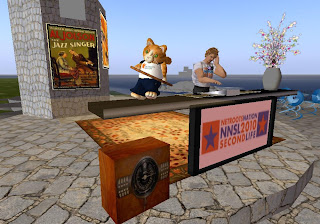 This weekend the dailykos convention, now known as Netroots Nation 2010, is taking place in Las Vegas this weekend. We'll be streaming some of the Keynote speeches into Second Life at Virtually Speaking Studios. If you can't run SL on your computer, you can still catch some of the streams via the intertubes. Montana's governor Swcheitzer's speech last night was great, Van Jones today was funny and wise. Hope we see you there!

Blood's a Rover is available from Jackson Street Books and other fine Independent bookstores.

As always, books ordered here will have a freebie publishers Advance Reading Copy included as a thank you to our blogosphere friends.
Posted by Tammy at 11:25 PM 1 comment: