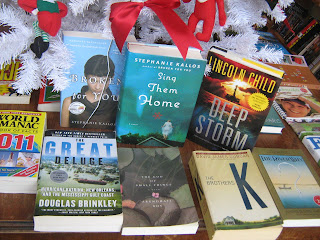 One of the pleasures of re-opening a brick and mortar store is that customers bring us some of their books to trade-in. The customers, of course, get some credit and can add to their own libraries inexpensively, and we, the booksellers, get to replenish our inventory and get reminded of some good books and discover books that have flown under our radar since our storefront hiatus.

Among the books we have recently received includes David James Duncan's fine family saga, The Brothers K. Duncan, the author of the acclaimed The River Why, tells the story of these brothers, brought up on a farm, by a father who had hoped to have a baseball career, but was thwarted in his youth. Set during the fifties and sixties, the book has many fine moments and when I read it a few years ago, I couldn't put it down.

Stephanie Kallos is the author of the perennial book club favorite, Broken for You, and her new novel, published in 2009, Sing Them Home, absolutely slipped by us. Another family saga, set in Nebraska, she tell the story of the Jones siblings whose young lives are irrevocably changed by the strange disappearance of their mother during a tornado in 1978. They are brought back together by the sudden passing of their distant father decades later, leading to self-discovery and insight.

SeattleTammy is enjoying Lincoln Child's Deep Storm, which was published a couple of years ago. Child is probably best known for his collaborations with Douglas Preston, and are well-written thrillers. Deep Storm is about a scientist investigating the mental illnesses suffered by a crew that seems to have discovered links to the ancient world of Atlantis.

Douglas Brinkley's The Great Deluge: Hurricane Katrina, New Orleans and the Mississippi Gulf Coast, is the highly regarded inquiry into what happened on August 29th, 2005. At great length, Brinkley delves into the devastation and the human cost of the tragedy. He conducted many, many interviews with the survivors, providing a history written at the human level.

Finally, we have seen a copy of Arundhati Roy's The God of Small Things come into the store. Originally published in 1997 and winner of the Booker Prize. the book is yet another family portrait, focusing on the lives of two fraternal twins, raised in Kerala, India. The events of the novel take place between 1969 and 1993, and describe and limn the lives of these two as well as the lives they touch. Roy, herself, has become a great human rights activist. To date this is her only novel.

So, what are you reading? And what do you hope Santa will bring you to read this year?
And DemoCommie, we are still awaiting the advance copy of your cookbook. 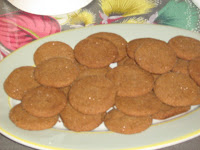 If you're in the neighborhood today, stop by for a gingersnap.


These books are available at Jackson Street Books and other fine Independent bookstores.

As always, books ordered here will have a freebie publishers Advance Reading Copy included as a thank you to our blogosphere friends.
Posted by SeattleDan at 11:09 PM No comments: