Inside the Secret World of Librarians: Truth Like The Sun 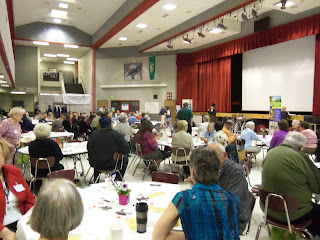 Last week, Dan and I were invited to sell books at the annual day-long conference for the Friends of Timberland Library, and the Board of directors.

Jim Lynch was to be their keynote speaker, and we were delighted to get to hear him again. 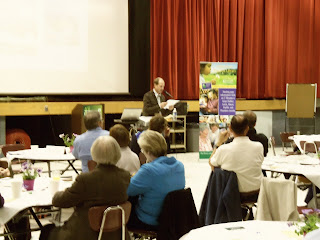 We've been fans since his first book, The Highest Tide, a YA novel that won the NW Bookseller's Award. A quirky coming of age story, set here along Mud Bay of Puget Sound, it magically captures the flora and fauna of the Sound.

Border Songs won both the Bookseller's Award and the Washington State Book Award. I told you about Border Songs back in a January book report. 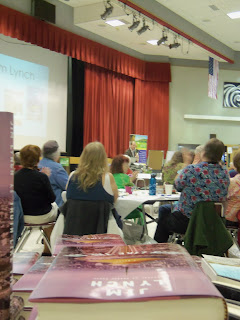 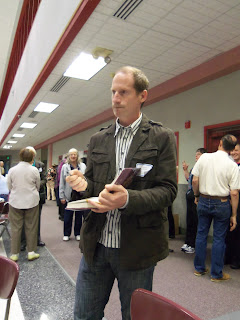 After reading a few selections and taking about the writing of Truth Like The Sun, Jim stayed and signed copies for the librarians. They were avid fans, and scooped up multiple copies at times with inscriptions for their intended gifts. All of Jim's titles are like that: once you read them you want to press them upon everyone you know. 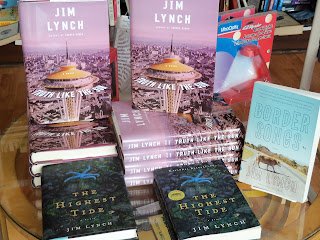 Truth Like The Sun, by Jim Lynch (Knopf $25.95) The book opens on the night before the opening of Seattle's World's Fair, in April of 1962. The young civic genius, Roger Morgan who had sketched this iconic design on a cocktail napkin is toasting the crowd:


“Can I get a moment of silence here?” As the room settles, he takes everything in—the strange gleaming faces and lopsided chandeliers, the counterclockwise drift of the lights below, the bright-lipped brunette seemingly modeling ringless fingers for him. He waits a few more beats. “We are simultaneously at the end of something challenging and magnificent and at the beginning of something challenging and magnificent. So let’s commit this moment to memory, okay? Look around. Remember what our city looked like on this night from up here. Remember how young we all were.” He leans back to milk the laughter. “Remember this moment,” he insists, “before the eyes of the world take a good long look at us.”

(read the rest of the chapter here.)

Alternating chapters show the young Morgan and his 70 year old self in 2001, now running for mayor. His glad-handing style is effortless, and he manages to charm everyone in the early primaries. Helen Gulanos is a tough reporter, newly hired by the ailing Post Intelligencer, who is determined to make her name by digging up the dirt on this candidate.

The Seattle caught on these pages is pitch perfect. The boom of the early 60s contrasts with the bust of the 2000s dot-coms. I was very much reminded of Fred Moody's Seattle & the Demons of Ambition, so it made me smile to see that quote at the start of the book. This is a great read you'll enjoy spending time in.

As to the title? You'll just have to wait to page 148 for that. I'll just say "Elvis". It becomes a fitting metaphor for what each of these characters would rather not have exposed.


One final picture, the signing was held at Ocasta High School in Westport, and while I'm sure their mascot is simply bundled up to protect from winter damage, I had the get a picture of the Masked Wildcat. 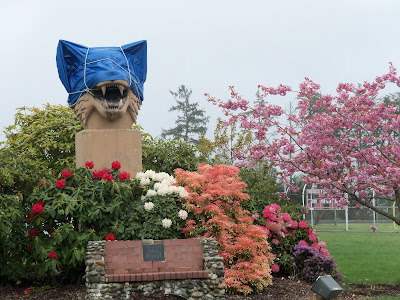