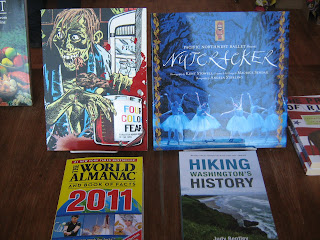 I'm delighted to have Four Color Fear, by John Benson (Fantagraphics, $29.95) on our new release table now. This is a delightful collection of Entertaining Comics most gruesome and twisted tales. Fantagraphics has a flip-thru preview that gives a feeling for the content on youtube. 42 complete comic books are reprinted in all their lurid colors.

Those wonderful, terrible horror comics of the 1950s are still so embedded in our popular culture that it’s hard to realize that those who actually remember reading them when they came out are now in their late sixties or early seventies. That these old comics still seem contemporary is largely due to the Entertaining Comics (EC) titles Tales from the Crypt, Vault of Horror and Haunt of Fear, which have been made into several feature films and a popular HBO series, and have been in print continuously for over forty years in a variety of formats (they’ve even been adapted in text form for younger readers). Horror masters Stephen King and George Romero have readily acknowledged an indebtedness to EC comics, which alone would be enough to prove their relevance to current entertainment tastes, but many others have also been influenced, directly or indirectly.

Undeniably, EC created a whole new style of horror. Rather than relying on traditional supernatural elements, EC typically focused on events that could actually happen, such as someone being boiled in oil or hacked to pieces. Realistic situations would build to “trick” endings that might be better described as ingenious rather than truly imaginative. When there was a fantastic element, it was often in the form of traditional vampires and werewolves entering a modern real-world setting. A vital EC element was its three “GhouLunatics,” the hosts whose sardonic and often humorous patter was integral to the horrific proceedings, but EC’s most important component was publisher Bill Gaines, who co-plotted most of the stories, loved the material he published, and encouraged his artists to do their best. Gaines brought a rare consistency to EC, though that consistency came at the expense of an increasingly narrow range as the series progressed.
.......
Rather than being grouped by artist, publisher, subject matter or chronologically, these stories have been arranged “aesthetically” to provide maximum variety and change of pace when the book is read straight through. So, relax, curl up in a cozy chair, set aside a block of time, and imagine yourself as a kid in the 1950s, reading these stories slowly to savor every chilling moment.

From the introduction by the author.

As always, books ordered here will have a freebie publishers Advance Reading Copy included as a thank you to our blogosphere friends.
Posted by Tammy at 1:38 PM 2 comments: