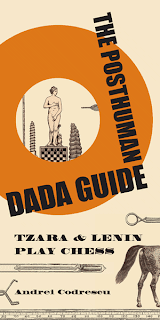 The Posthuman Dada Guide, Tzara & Lenin Play Chess by Andrei Codrescu (Princeton Press $16.95) This delightful volume uses the historical figures of Tristan Tzara, the Romanian poet and V.I. Lenin to look at the split between radical art and ideological revolution in 1916. Zurich had become a haven for artists and other refugees. Hugo Ball rented the Meirei restauraunt to host a Kuntstlerkneipe (cabaret) named Voltaire. Decorated with paintings by Arthur Segal, Pablo Picasso, Wassily Kadinsky, Henri Matisse, Paul Klee, Arturo Giametti, and Otto van Rees. The entertainment included Tristan Tzara reciting and shouting poetry, the chanteuse Emmy Hemmings, and a Russian balalaika band. As the evening wore on, the skits and improvisations became more raucus egged on by the drunken audience, to culminate in Tzara reciting nonsense French and un-rolling a roll of toilet paper with the word "merde" printed on it.

The Swiss cafe culture was a vibrant microcosm of the Bohemian life during these years with Einstein, Joyce, Hans Arp, Carl Jung and Freud.

Codrescu's use of posthuman shows they we have become so integrated with our technologies, we no longer are able to survive the natural world without them. This slim volume is your guide to this new world.

"This is a guide for instructing posthumans in living a Dada life. It is not advisible, nor was it ever, to lead a Dada life. It is and it was always foolish and self-destructive to live a Dada life because a Dada life will include by definition pranks, buffoonery, masking, deranged senses, intoxication, sabotage, taboo breaking, playing childish and/or dangerous games, waking up dead gods, and not taking education seriously. On the other hand, the accidental production of novel objects results occasionally from the practice of Dada."

I love listening to Mr. Codrescu on NPR, and here's an interview this past spring discussing The Posthuman Dada Guide. You can order the book from us and begin your Dada life.